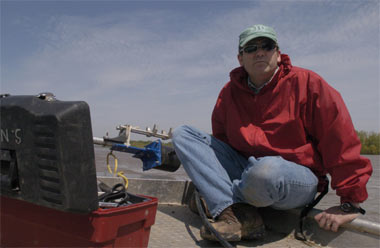 Keeping watch -- James E. Garvey, associate director of the Fisheries & Illinois Aquaculture Center at Southern Illinois University Carbondale, sits on the bow of a research boat cruising the Mississippi River recently near Cape Girardeau, Mo. Garvey is helping lead a team of researchers as it tracks pallid sturgeon in the river in an effort to locate the fish's spawning grounds. Photo by Russell Bailey

CARBONDALE, Ill. -- A group of research students and faculty from Southern Illinois University Carbondale is on a stake out these days.

Seven days a week, 24 hours a day, they patrol an area of the Mississippi River near Cape Girardeau, Mo., keeping tabs on two egg-laden pallid sturgeon that are hanging out nearby. The researchers are waiting for the magic moment -- probably triggered by rising water temperature -- when the fish decide to leave that area and swim upstream to a pre-determined area known only to them, where they will drop their eggs for fertilization.

In making the trip, the two females -- an incredibly lucky find for the SIUC researchers -- may reveal the answer to one of the enduring mysteries surrounding the fierce-looking but endangered fish. Once researchers know where the females spawn, they can advise river managers on protecting such environments along the mighty river.

"There are many things we just don't know about this fish, and finding two females with black eggs in them -- which means they are getting ready to spawn -- was a very lucky thing," said James E. Garvey, associate director of the Fisheries & Illinois Aquaculture Center at SIUC. "If we can confirm a site where they are spawning, then we can tell the Army Corps of Engineers how they can protect and encourage similar sites and incorporate that philosophy into their river management approach."

Led by Garvey, the SIUC research team includes about 10 graduate and six undergraduate students. They work with members of the Missouri Department of Conservation, who provide research boats and operators and help the researchers capture, tag and track pallid sturgeon. Garvey is a co-investigator on the project, working closely with Bob Hrabik and Dave Herzog, with the MDC.

Garvey has studied this particular type of fish for years, examining the health of both pallid sturgeon and its smaller, slightly darker cousin, the shovelnose sturgeon. This latest work is aimed at identifying key environments the fish needs, such as its spawning sites and areas where young fish live until they become adults.

Sturgeon are not plentiful. Garvey estimates a population of 1,500 to 5,000 mature fish in the Middle Mississippi River, which runs basically from St. Louis south to Cairo. Of those, only about 30 percent spawn each year, half of that number female.

So like expectant parents, the group anxiously watches and waits as their two lucky finds tool around the area, all awaiting the big moment.

On a recent spring day on the Mississippi River, one of the two fish in question -- fish No. 97, officially -- is hanging out near an island just south of the Emerson Bridge, about 6.5 meters beneath the dark, swirling water. Two research boats, both owned and operated by the MDC, casually troll around the area as researchers take their regular measurements and recordings.

Nick Wahl, an SIUC fisheries graduate student from Dwight, confirms No. 97's position by placing a directional hydrophone into the water at three locations, where it picks up the chirping radio tag researchers attached to the fish three weeks ago. Using this method, Wahl triangulates the fish's position. His reaction is unmistaken ho-hum.

"She still hasn't moved," said Wahl, the son of Gloria Wahl. "You get used to it out here. We pretty much find the fish and wait."

Wahl spends at least one shift a week on river helping fill the 24-hour sturgeon "love watch." Like the others, Wahl looks forward to the day - likely coming very soon - that fish No. 97 isn't where they expect her to be. Of course, they'll have to scramble to find her at that point, too.

A while later, on the research boat's bow, Sara Tripp, a graduate student from Chester, struggles with a $25,000 transponder. It's essentially a fish finder like the one you might find on any Southern Illinois bass fisher's boat, only this one is the size of crock pot.

Tripp earned her undergraduate degree in administration of justice at SIUC, but got hooked on studying fish along the way. Now a graduate student, she also has landed a job with the MDC and plans to remain a fisheries specialist.

"Through SIUC, I've been able to do this hands-on research, which really helped me get the job with the MDC," said Tripp, the daughter of Mary and Kenny Tripp.

A balky connection is frustrating the student researchers, but Tripp eventually conquers it. Then the transponder isn't working. Garvey gets involved and between the two of them and a box of simple hand tools they eventually begin collecting data.

"That's a pretty typical situation out here in the field," Garvey says, keeping good humor in the face of adversity.

The transponder sends data to a computer in the boat's cabin. Garvey's expert eye picks out barely discernible colored lines that likely announce the presence of a fish. Then he points to a set of signals about 5 meters deep. "I would say that's probably No. 97 right there," he says.

The research team has played this daily round-the-clock game of hide-and-seek since early April. But the temperature of the high water is rising, and when it reaches 17 degrees Celsius, the team expects the females to head upstream.

The federal government listed the pallid sturgeon as endangered in 1990, Garvey said, following a population crash on the Missouri River. Garvey said an SIUC graduate, Joyce Collins, actually participated in writing the biological opinion for the U.S. Fish and Wildlife Service that argued the Army Corps needed to incorporate sturgeon habitat into its approach to its main mission of keeping the rivers navigable and safe.

Garvey hopes his work will help the corps understand ways it can do both at the same time. Loss of habitat, however, isn't the only threat to pallid sturgeon recovering. Fishers searching for shovelnose sturgeon that provide caviar also inadvertently net the pallids. Garvey's previous research data warned the populations are in trouble.

One reason it's hard to study the problem is the environment in which the fish live.

"It's an incredibly difficult system to work in," Garvey said. "You can't dive it and see anything. It's dangerous -- if you fall in you can die and there's always something coming down the river that can kill you. And it's hard to get to certain areas."

All this adds up to little research. There are plenty of theories about sturgeon spawning, however, and Garvey has one he'd like to test.

Garvey's theory holds that the male sturgeon are already waiting at the spawning ground, making low frequency "love sounds" to lure the females. When they're ready, the females will pick one or even several males to fertilize their eggs as they expel them from their bodies.