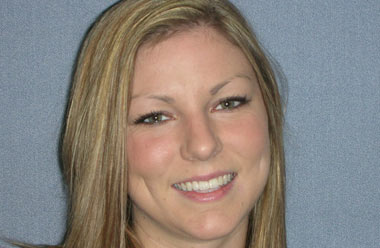 The prestigious National Intramural-Recreational Sports Association (NIRSA) award recognizes top student employees or participants in the Department of Recreational Sports. It honors student for their efforts in the field of recreation, in the classroom and for participation and volunteerism involvement on and off campus. Grimes is one of just four undergraduate student winners in Region III, which covers Illinois, Wisconsin, Michigan, Indiana and Ohio. Six regions comprise NIRSA.

Grimes has worked for a year-and-a-half in facility scheduling and billing. A junior from Colfax, she's majoring in sociology. The daughter of Dan and Karen Grimes, Ashley plans to continue on to law school after graduating in May 2009. She is interested in practicing corporate or patent law.

"Ashley was an easy choice when the staff looked at the criteria for nominees," said William P. Ehling, director of the Student Recreation Center. "Her academic success and her unselfishness in serving others stand out. The environmental/sustainability leadership she is providing RSS, combined with her excellent performance as an employee talking to and meeting the reservation customers of RSS, is at an admirable level. She leads by example and truly understands the talents she has and seeks opportunities to help others as well as continue to grow herself."

The late Wasson organized the group in the 1950s as the National Intramural Association. It now includes more than 4,000 members from more than 700 universities, public park and recreation districts, correctional facilities, military installations, non-profit organizations and private companies. The organization created the annual William N. Wasson Student Leadership and Academic Award to recognize students in the field of recreation who "set the standard."