New assistant director in place at Touch of Nature 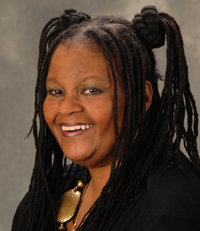 CARBONDALE, Ill. -- For MaryAnne Cunningham-Ismael it was truly love at first sight. The minute the new assistant director for the Touch of Nature Environmental Center at Southern Illinois University Carbondale encountered Southern Illinois and its people, she couldn't imagine being anywhere else.

"The hospitality here is just immeasurable," Cunningham-Ismael said shortly after starting her new position recently within the Division of Continuing Education at SIUC. "The Midwest has me sold. The people of the community are just marvelous and there's so much to do. Everyone at SIUC and the staff at Touch of Nature are just wonderful, such ultimate professionals."

The region will soon see evidence of Cunningham-Ismael's enthusiasm for the unique environmental center and the community. She plans development of even more programs to encourage the public to take advantage of the jewel hidden alongside Little Grassy Lake.

She also plans to concentrate on securing grant funding to further enhance Touch of Nature's facilities.

"I look forward to working with MaryAnne Cunningham-Ismael," said Susan C. Edgren, acting director of the Division of Continuing Education. "MaryAnne brings with her a diverse background and exceptional qualifications. It is my hope that she will bring fresh and new ideas to already-outstanding programs and facilities."

Cunningham-Ismael earned her bachelor's in psychology from Howard University in Washington, D.C., and her master's in recreation administration at the University of Maryland at College Park. She's also completed numerous graduate hours toward a master's in human development at Howard University and completed all of the coursework for the doctoral program toward her doctorate in recreation administration at the University of Maryland-College Park. Cunningham-Ismael is four classes away from her doctoral comprehensive exams toward her doctorate in training and performance improvement at Capella University in Minneapolis.

Her career has been quite eclectic. Mostly recently she was full-time military consultant for Ceridian Corp. in St. Petersburg, Fla. She's also worked as a therapeutic group facilitator for Global Youth Services Inc. in Florida, as an assistant professor at Hampton University in Hampton, Va., as assistant director and acting director of the Suffolk Parks Recreation and Facility Management in Suffolk, Va., and as assistant superintendent of the Norfolk Parks and Recreation and General Services in Norfolk, Va.

She's also been a part-time corrections counselor in Virginia, the area director for the London branch of Richmond Fellowship International, a planning and design technician for the Maryland National Capitol Park and Planning Commission and served in a variety of other positions in the health and mental health sector and in parks and recreation. In addition, she developed and completed "Retrofitting for Handicapped Accessibility: Guidelines for Maintenance," a major study on retrofitting facilities for the handicapped for the Maryland Department of Parks and Recreation.

Bringing originality and positive change to her work are important to Cunningham-Ismael. She's been involved in developing standards for outdoor recreation programming accessibility as well as teaching accessibility law and retrofitting requirements to attorneys in Virginia. Also in Virginia, she handled grant writing for churches, synagogues and mosques in her area, and served as a grant reviewer for the U.S. Department Education.

For five years she planned and implemented the annual "Tim Reid Celebrity Golf and Tennis Tournament," bringing in numerous well-known celebrities and ample donations funding scholarships for minority students in Suffolk. The first Native American female to win the Virginia Recreation and Parks Society Distinguished Service Award in 2000, she's garnered several other awards as well for her work.

She was looking for a community where she and her spouse "could make a difference and retire in the future" led Cunningham-Ismael and her husband, along with her admittedly pampered Pekinese pooch Chynna, to SIUC. She's anxious to help an even greater number of people and larger cross-section of the population to experience all Touch of Nature Environmental Center has to offer, she said.

Cunningham-Ismael fills the position created by the retirement in 2007 of David L. Gename.