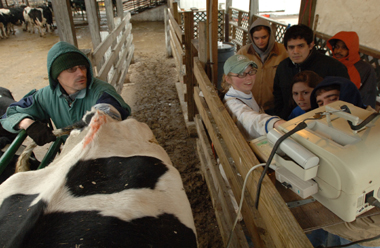 CARBONDALE, Ill. -- They may look like the offspring of a tent and a Quonset hut, but Southern Illinois University Carbondale's new dairy barns save money, make money and expand both research and teaching opportunities for the College of Agricultural Sciences.

Erected last December at the dairy on McLafferty Road, the two buildings replaced old-style stall housing, a small research barn and a feed shelter, all dating from the '60s and '70s. Made of translucent, heat-blocking fabric stretched over steel frames, the new barns went up in no time at all.

"We had the small building done in a day, the large one up in three (reducing labor expenses)," said dairy foreman Chet E. Stuemke, a 1999 ag college alum from Altamont.

The fabric will cut summer cooling costs, blocking the sun's penetrating rays and allowing excess heat to escape. Even more important, said Stuemke, it lets in a lot of light.

"In the old building, we had to have at least ten to 20 lights - we use three now, and that's probably one too many," he said. "It really cuts down on our power bill."

It's better milk, too, as shown by its somatic cell count (the number of bacteria-fighting cells; a high count can indicate the presence of infection).

"We're more than 100,000 cells below the industry standard," Stuemke said. "It dropped almost immediately after we put the barns up,"

"This has gained us another 20 to 40 cents per hundred pounds in the price we get for our milk."

Stuemke said the new barns' thick sawdust floors make for a healthier herd. The cows have come down with fewer udder infections, hoof problems and swollen knees and hocks since moving off the old barns' concrete floors.

The sawdust floors, commonly known as composting bed pack, also keep the cows warmer and drier than conventional bedding with heat generated by the mix of decomposing sawdust and animal waste.

"We have to clean it out only once a year instead of every 30 days like we did before, and we can use the compost on the fields, so we create a recycling circle," Stuemke said.

With the basics taken care of, a happy, healthy, comfy cow's mind can turn to other things - like making little cows. The new barns have helped out here, too.

"When cows are on concrete, they sometimes don't show obvious signs of estrus (a readiness to breed) because they're not sure of their footing," Stuemke said.

"When cows are in heat, they will mount other cows. In the new barns, because they're always walking on a soft surface, we began to see signs of estrus almost immediately. Two days after we put up the barn, we bred eight cows, and we were breeding cows for three weeks after that."

Breeding will be playing a larger part in the dairy's operation as the college looks for ways to boost its income.

"My budget is based on the milk and the animals I sell, so we're focusing more on a higher production cow that will milk better and last longer,"Stuemke said.

"I want to see five or six lactations out of my animals - meaning they've had five or six calves - and it should be seven to 10 years before they're sold, instead of three."

Stuemke has bought 20 new cows since his arrival in 2005, aiming to improve the herd's genetics. He's also changed the breeding schedule to produce two-thirds of the dairy's calves in the fall and the other third in the spring to facilitate the dairy's cash flow.

"When you have all the calves in late fall to winter, the cows are done by June, July, August, which puts the nix to any income you're going to generate,"Stuemke said.

"Also, you can get more milk out of the cow when it's cold, and you can breed them back more easily."

While the barns play a starring role in the money-making side of the dairy, they shine in the research area.

"The smaller barn is 40 feet by 70 feet and gives us four different options for housing and feed research, and it's easily reconfigured," Stuemke said.

"We could have 24 cows on research feed out there and keep them separated."

Feed research going on now includes a trial substituting a biodiesel by-product for a portion of corn rations (see related story, "Ethanol by-product might feed livestock") and one substituting canola for alfalfa. Researchers will also be taking a look at using readily available soybean chaff rather than harder-to-find sawdust in the increasingly popular compost bed pack.

In addition, the barns offer a variety of learning experiences for students enrolled in animal sciences courses and a new veterinary technician program and especially for the student laborers who keep the dairy running day to day.

"They do everything," Stuemke said.

"They make suggestions, and if it makes sense, we will try it. I try to give them a say in things, though they understand the final decision is mine. But I want them to learn something from me - I don't want them to come in just for the hours. And if I can get just one person interested in dairy farming, it's worth it."