CARBONDALE, Ill. -- The events of the past few weeks are both a dream come true and a heck of a way to end his senior year for Ryan Jansen, a student in the School of Art and Design at Southern Illinois University Carbondale.

What started out as a project for a design class earned Jansen international exposure for his prototype design, a trip to New York City, a face-to-face with famous inventor James Dyson and a few thousand dollars as well.

"I can't believe all the stuff that's happening," Jansen, a Teutopolis native, said in a telephone interview shortly after his return from New York City. "It's been crazy with finals coming and everything, but it's a good problem to have."

Jansen's design, "The Rake N' Take," won first place in the Eye for Why - Dyson Student Design Competition for 2008. The contest challenges students to re-envision an existing product, and correct any shortcomings in that product. Jansen improved on a lawn-care staple, the rake.

Jansen explained that he came up with the idea when he observed how often people raking their lawns had to bend over to pick up the leaves. He decided to find a way to take that time-consuming nuisance of picking up leaves out of the raking process. His Rake N' Take uses a combination handle to operate a rake that clutches the leaves rather than merely moves them.

He's not sure how many rake models he made before he hit on a design that worked, he said. And for Jansen, it wasn't a matter of going back to the drawing board - he found that in this case, trial and error with models was more effective. He had his "ah-ha" moment after taking a weekend off from the problem.

"I was almost at wit's end," he said. "I'd fall asleep and dream about rakes."

He entered the Dyson competition as an after-thought. He remembered pretty quickly when he got a phone call saying he won. In fact, he said, he had to cover the phone so he could scream. He called his mother first and both of them were so excited they could barely talk. Then he called his fiancÃ©e, Holly McMahon.

Since then, his whirlwind life included a radio interview from New York City for a Grand Rapids, Mich., radio station, an appearance on "Good Morning America Now," and meeting James Dyson, famous for his bagless vacuum cleaners. Jansen earned $5,000 for his first place finish in the Dyson competition. His advising professor won $2,000. The adviser in question, though, associate professor of industrial design Steve Belletire, said his role as adviser was only part of the faculty team. Walter Hargrove, assistant instructor of industrial design, taught the class that stated all the contest entering. As a result, the three of them - Jansen, Belletire and Hargrove - elected to donate the $2,000 to the School of Art and Design. The money will pay for conference trips, guest speakers, design workshops and other activities.

"Regarding this particular competition, I can state that everyone associated with our program is extremely proud of Ryan's recognition," Belletire said. "This includes the School of Art and Design as well as the College of Liberal Arts and SIUC. This is a major award at the national level that will also receive international recognition, as Ryan will represent the USA in an international level competition."

"As for Ryan's personal efforts, I have seen him dive deep into all of his design projects during his career here at SIUC, and he doesn't stop until he has exhausted all possibilities and himself!" Belletire said. "The results are well-conceived solutions that benefit his target users - in this case, anyone who has ever used a rake."

Jansen has a patent pending on his invention that protects his invention from copies for at least one year. He said he has several options for marketing the product. 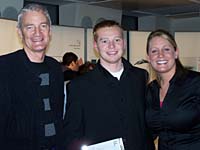 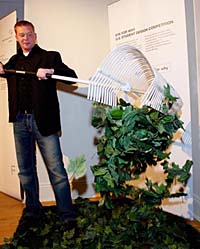