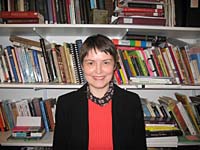 CARBONDALE, Ill. — You never know what the day's mail might bring.

For Carma Gorman, associate professor of art history and head of the academic area of the School of Art and Design at Southern Illinois University Carbondale, it was notification that the Organization of American Historians named her essay from "American Quarterly" one of the 10 best American history essays of the year.

"My essay was selected by a panel of 10 historians who read hundreds of essays," she said. "I didn't know mine was even being considered until I was told it was selected."

The book, "The Best American History Essays 2008," is the third annual volume in a series published through the OAH. This volume includes history articles published between the summers of 2006 and 2007. The collection provides an overview of the top work and important trends in the study of American history.

Gorman's essay is titled, "Educating the Eye: Body Mechanics and Streamlining in the United States, 1925-1950." Her article seeks to explain why, after 1925, the products of "formerly artless industries" – such as eyeglasses, typewriters and automobiles – shifted from purely utilitarian to more streamlined and attractive models. Gorman argues that consumers were not as passive in this process as most historical explanations suggest. She points to then-new trends in education, which, while they did not specifically address the appearance of utilitarian objects, emphasized "the personal and social importance of good form" and taught students to know it when they saw it.

One of these educational trends was, of all things, posture-training in gym class. Gorman points out that "body mechanics," a new component of the physical education curriculum beginning in the mid-1920s, trained students to appreciate a more streamlined form. She argues that middle- and upper-middle-class consumers were "primed by their schooling to expect bodies and products to conform to similar standards of beauty and efficiency."

David Roediger from the University of Illinois edited the volume of essays. A 10-member board of historians from Cambridge, Western Michigan, Brandeis, Rutgers and other universities sorted through more than 200 published history articles in leading journals to come up with a short-list, and then finally the top 10.

The 288-page book, published in March, is available from Palgrave Macmillan, new in paperback for $26.95 and new in hardcover for $79.95. It is also available from Amazon.com or by ordering from your local bookseller.