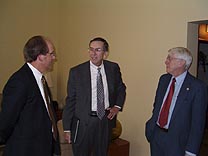 CARBONDALE, Ill. — Bob Gower has distinguished himself as a leader by rebuilding a major chemical and refining company and establishing new businesses. The Southern Illinois University Carbondale alumnus believes his alma mater can also prosper by forming an alliance with these companies.

Lyondell Petrochemical Co. was losing approximately $200 million a year when Gower took over as president and CEO in 1985. Gower orchestrated a turnaround that led to the Houston-based firm becoming one of the 100 Best Managed Companies in the World named by Industry Week Magazine, and a publicly traded New York Stock Exchange company in 1989. Upon retiring from Lyondell in 1996, Gower focused on establishing and developing various businesses.

The West Frankfort native returned to Southern Illinois recently to listen to presentations conducted by the Gower Fellowship Award recipients, an honor he and his wife, Beth, established for the Department of Chemistry and Biochemistry in the SIUC College of Science. He also visited with University administrators and College of Science representatives about the impact research could have on the institution's future.

"Our environment is changing and the need for scientific development will be greater than ever as we move forward," Gower said. "Most businesses have either diminished their amount of research or changed their direction entirely.

"The very best research scientists are at universities. And most of the innovative developments in our country derive from small start-up companies. This combination creates a real opportunity for Southern to differentiate itself from others. SIU can step forward into a totally new era."

Gower is a member of the steering committee for Opportunity Through Excellence, the University's comprehensive campaign, with a goal of raising $100 million by June 2008. The campaign seeks to solicit and raise funds from private sources to create additional scholarships and graduate assistantships for students, embellish faculty positions and enhance University programs and facilities.

"The University already has great scientists and could take it to another level in the future. I'm hoping the campaign sheds even more light on this fact," Gower said. "I know one of Southern's goals is to improve its national ranking as a research institution. That is very important because a great university has great research capability."

Gower, who received his bachelor's and master's degrees in chemistry from SIUC in 1958 and 1960, respectively, has first-hand knowledge of research and business. Prior to spearheading Lyondell's growth into a major chemical firm, Gower ascended to various positions in Sinclair Oil and Atlantic Richfield, major oil and chemical companies in the 1960s. He has worked with his daughters in establishing new businesses and is aware of the challenges of such efforts.

Additionally, in 2000, he worked closely with the late Richard Smalley, a professor at Rice University who, along with two other associates, won the Nobel Prize for chemistry in 1996, in forming Carbon Nanotechnologies Inc. He served as president and CEO until merging CNI into another company, Unidym Corp., and continues his involvement as an investor.

The 1996 SIU Distinguished Alumni Award recipient, who also holds a doctorate in organic chemistry from the University of Minnesota, said he is pleased with the University's emphasis on research. Gower communicates with a number of universities and says SIUC can continue to prosper by focusing research in areas of great interest, making the University business friendly and reaching out to the business community with business/science lunches or seminars in key cities.

"I have served in a wide range of positions. Sometimes a person like that can offer a different point of view," he said. "Historically, there has been an uncomfortable relationship between businesses and universities. But I'm convinced that both entities would be better served to work together in development and implementation phases. If SIU can bridge this gap with these businesses it can begin to differentiate itself from others."

Jay Means, dean of the College of Science, agreed with Gower's assessment.

"Bob Gower is one of our success stories who cares about his University and wants us to move forward in the sciences," Means says. "Research has been an integral part of the faculty and student experience at SIUC. It is my goal to continue that mission in the College of Science. The University is a vehicle through which we can continue building the Southern Illinois region and we have great potential to have an impact nationally in the field of science."

Rickey N. McCurry, vice chancellor for institutional advancement and CEO of the SIU Foundation, said alumni such as Gower can have a significant impact on the University.

"The support of our alumni and friends has become increasingly critical. Bob Gower offers a wide range of experience and knowledge that can certainly be beneficial to our institution," McCurry said. "We are truly appreciative of his continued involvement and fortunate to have someone of this caliber in the SIU family."

Scientific research — Southern Illinois University Carbondale alumnus Bob Gower, center, talks with John A. Koropchak, vice chancellor for research and dean of the graduate school, left, and Jay Means, dean of the College of Science, during a visit to the campus recently. Gower, on hand to listen to presentations conducted by the Gower Fellowship Award recipients, also visited with University administrators and College of Science representatives about the impact research could have on the institution's future.