Pronouncer: "Wei Bian" is "way bee-AHN")
CARBONDALE, Ill. — Most parents who homeschool their children do just fine with reading, writing and 'rithmetic, but when it comes to physical education, their "Three R's"often … "Rn't."

"I'm not going to teach Samuel basketball and soccer — it's not my thing," says Mary L. Powell of her 10-year-old son.

But Powell doesn't have to do it because one or more of Wei Bian's 24 college students will, if we can mix metaphors here, gladly step up to the plate.

Bian, an assistant professor of kinesiology who came to Southern Illinois University Carbondale two years ago, inherited the beginnings of a physical education class designed for the region's homeschoolers from her predecessor, Michael R. Judd, who was retiring.

"He gave me a list of homeschool parents and told me what he did and told me that it was up to me if I wanted to continue," Bian said.

"I decided to continue for the sake of the children. That first semester, there were tons of things I didn't know about the program, about the University, but I survived."

For Bian, many of whose students hope to teach physical education in public schools, the homeschool program has become a valuable teaching aid in which work is play and play is work.

"This semester, my students have developed their own curriculum for a unit and are teaching that unit," she said.

"I truly believe in learning by doing, especially for our field. You cannot learn how to teach without actually teaching, working with students."

Davies Gymnasium, where the class takes place Thursday afternoons, resembles a one-room schoolhouse when all 40 to 50 students show up. Divided by age into small groups, the little ones gallop, hop, skip, leap, and learn to throw, catch, kick and dribble. The bigger ones play games such as volleyball, basketball, hockey and badminton, or focus on fitness.

"With the younger kids, it's more related to fundamental movement skills," Bian said.

"When it's developmentally appropriate, we provide instruction in both team and individual sports. Some kids love sports; some don't want that competitive setting. Some of the older kids don't want to dance or act like an animal. But I think most of the time they all enjoy the class."

The class offers more to the kids than just physical activity, Bian believes.

"They have the opportunity to experience a part of regular school that they don't get at home," she said.

Kara A. Dunkel, the mother of 12-year-old William, a program "veteran," agreed.

"The interaction with other youth is very important for a homeschooler," she said, as she watched the action from the bleachers.

"The interaction with the teachers is important, too — to have someone besides myself challenging him and opening him to new ideas and correcting him in a way that's not my style. It's good to have other influences besides the parents."

SIUC history professor Jonathan J. Bean said his daughter Emily, a newcomer to the class, was "a 7-year-old in a 10-year-old's body."

"She's big for her age; she needs to work on large-body skills — and she's energetic," he said. Both Bean and his wife, who share homeschooling duties, have taken note of the swelling numbers of obese children.

"We feel that PE is crucial at this age," he said.

"I think this is a win-win for SIU. It benefits the physical education majors, Dr. Wei's research and the kids — it's a great outreach for the community." 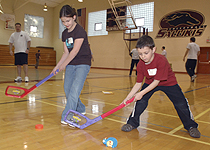 Caption 1: Homeschooler hoopsters —Anna Burnett, Samuel Powell and Emily Bean mix it up with hoops of the hula variety.