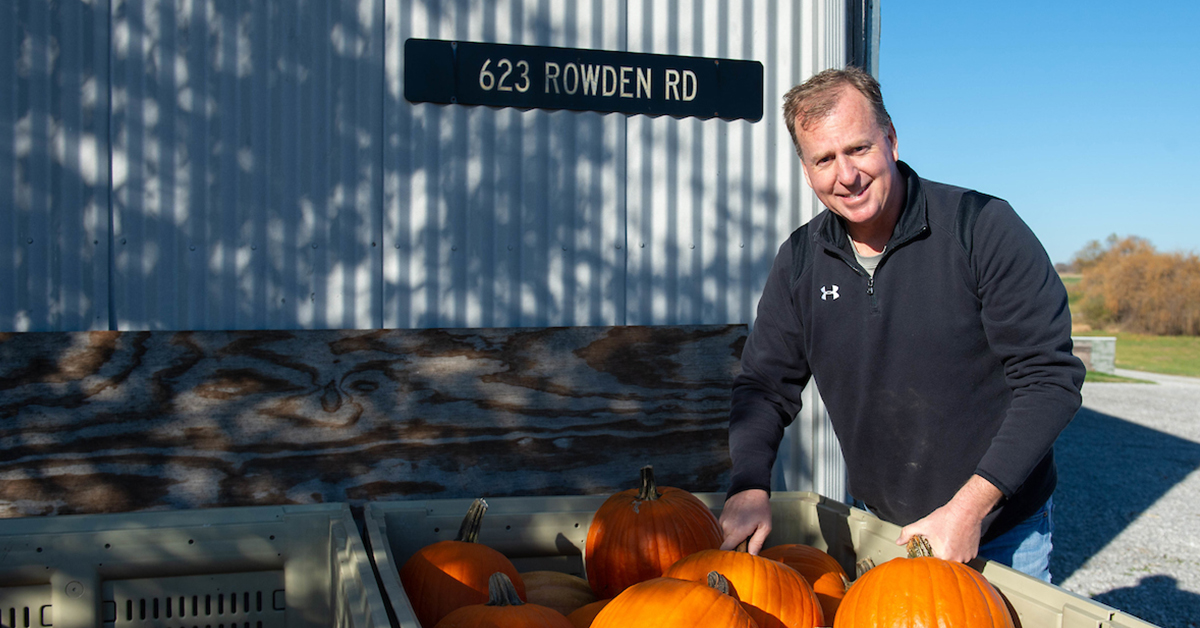 Alan Walters, professor of vegetable science and breeding in the Department of Plant, Soil, and Agricultural Systems. (Photo by Yenitza Melgoza)

CARBONDALE, Ill. – On a greenhouse shelf near Alan Walters’ vegetable laboratory sits a pile of pumpkins that exhibits a variety of orange hues, textures and sizes that have been cataloged, not carved or made into pies. Walters, a professor of vegetable science and breeding at Southern Illinois University Carbondale, will tell you these days pumpkins are a lot more than a doorstep ornament to celebrate Halloween.

This summer alone, up until the late October harvest, Walters, along with SIU staff and students at the Horticulture Research Farm, managed nearly three acres of pumpkins and garnered about $50,000 in fresh grant money to research how to better grow the crop.

When it comes to pumpkin, the state of Illinois is smashing the rest of the country. At 420 million pounds in 2019, Illinois produced nearly four times the amount of pumpkins as the second most productive state (California), according to the U.S. Department of Agriculture. Most of the canned pumpkin (a different variety than the glossy ones turned into scary faces) also comes from Illinois, which proudly calls pumpkin the official state pie.

The gross value of the pumpkin industry is about $200 million in Illinois. Pumpkins and horseradish, the other vegetable Walters focuses on, are two of the most important specialty crops grown in Illinois.

The demand for pumpkins has increased exponentially in the last 20 years, Walters said. He arrived at SIU in 1998.

“I think people are wanting to decorate more. It’s not just for Halloween. It’s for autumn,” he said. “You’ll still see people have pumpkins on their doorstep until they decorate for Christmas. Then you look at the increased popularity of pumpkin farms, where people want to walk around and spend a good part of a day with their friends and family. And everybody’s looking for something different — something that stands out.

“Pumpkins have become an important part of America.”

In five years, Walters figures, SIU will showcase some new pumpkin varieties in the Carbondale area, once the developed lines have adapted to the southern Illinois climate. He notes that the northern part of the state’s cooler summers and central Illinois’ “perfect soil” have advantages that pumpkins like compared to our hot summers and poor soils in southern Illinois.

Not many pumpkin purchasers at markets, grocery stores or increasingly popular pumpkin farms probably give much thought to heat-tolerant genetics. But with an increasingly warm global climate, improving genetics is part of Walters’ ongoing research.

“We’ve been evaluating several of our new lines over a number of years, then making some additional crosses,” he said.

Research is also being performed at SIU’s Belleville Research Station, such as the influence of using clover and other cover crops and examining bee pollination patterns.

“These studies are evaluating the influence of different pollination systems on crop yield and pollination efficiency,” Walters said. “We’ve got several studies going on.”

He points out that Illinois is unique in having as much crop growth dedicated to decorative pumpkins as ones that are processed for food — roughly half and half, Walters estimates.

Pumpkins take roughly anywhere from 75 to 120 days from planting to harvest, and in many cases, require nearly daily observation. That provides a lot of opportunities to study the vegetable.

“It’s a lot more involved than just throwing some seeds out there,” Walters said.

Farmers must contend with insects, plant diseases such as downy mildew and bacterial spot that become prevalent during heavy rains and managing fertility to increase yields.

“Farmers always are looking for ways to improve the soils, control erosion, increase organic matter,” Walters said. “Chemical companies seek our help, too, as do other entities. Growers are always looking for an immediate effect to improve their production practices.”