CARBONDALE, Ill. — A virtual discussion at Southern Illinois University Carbondale next week will examine why the works of 12 female animation film directors in the Soviet Union and Russia should be included in the tradition of women’s cinema.

Authors Michele Leigh, a senior library supervisor with Morris Library, and Lora Mjolsness, a lecturer in University of California, Irvine’s Department of European Studies, will host the Zoom forum and discuss their book: “She Animates: Soviet Female Subjectivity in Soviet and Russian Animation.”

The women featured in the book span about a century of filmmaking, Leigh said. The book begins in the 1920s with some of the first known women animators and goes to 2018 with some of the women who currently direct short and feature-length films, teach animation and run their own companies.

Leigh and Mjolsness have been working on the book, published this month, for several years, including while Leigh was finishing research as a Fulbright Scholar in 2016.

Leigh hopes the lecture and book give people “a better understanding of the amazing work that female animators contributed to the history of Soviet and Russian animation and along the way change the way histories of animation are written.”

Throughout history, the work of female filmmakers has been overlooked, Leigh said.

“In most film histories, you will find that female and minority filmmakers are marginalized or completely ignored, though there has been a lot of work in the last 20 years to rectify this situation and there is still much work that needs to be done. In that vein, this book highlights the work of women who helped to shape and who are still shaping the animation industry in Russia,” she said. 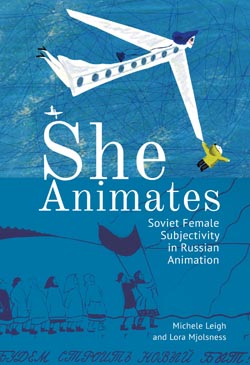