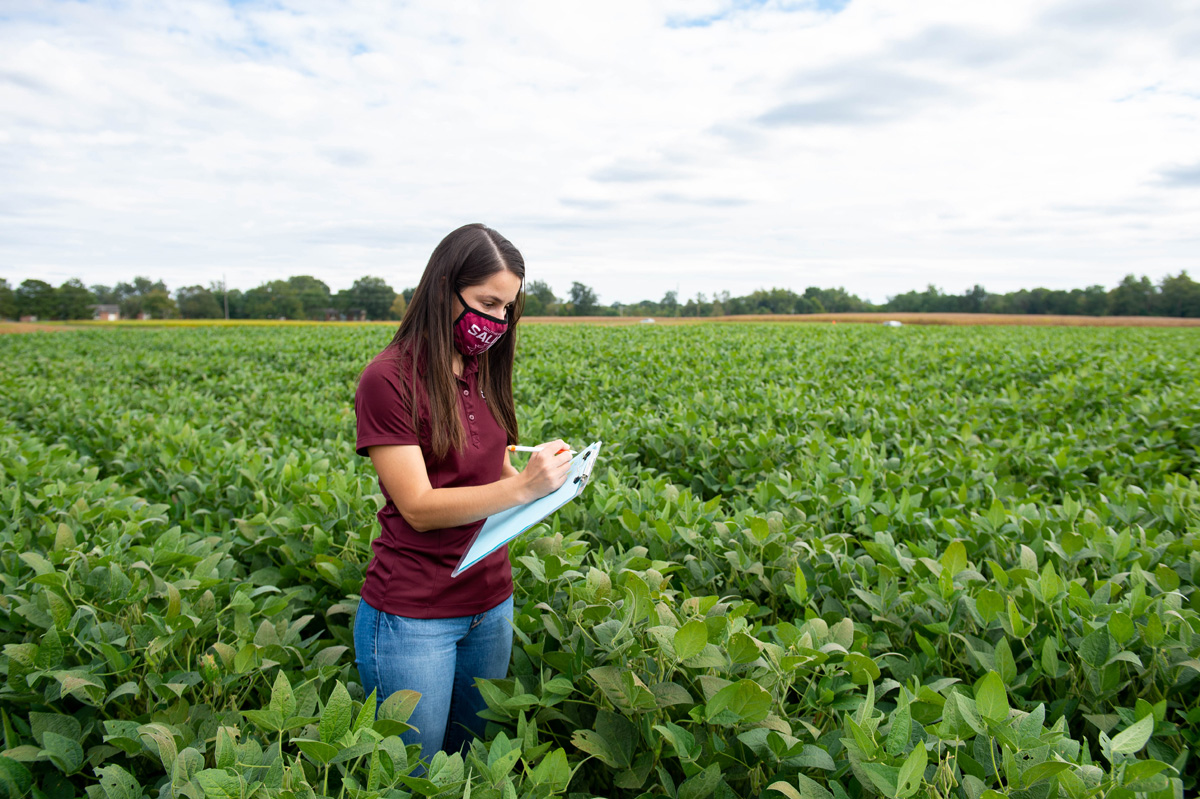 CARBONDALE, Ill. — Mirian Pimentel, a Southern Illinois University Carbondale agricultural sciences doctoral student, didn’t know much about soybeans when she first came to the region in August 2014 through the Brazilian Scientific Mobility program.

Raised on a small vegetable farm in Sumidouro, Rio de Janeiro, Pimentel first visited SIU as an undergraduate student and spent about 18 months in the region. At the time, Pimentel didn’t know much about soybeans.

Now, however, Pimentel has discovered a promising new tool to fight sudden death syndrome (SDS) in one of the state’s most critical crops. Her work, guided by School of Agricultural Sciences professors Ahmad Fakhoury and Jason Bond, has shown a way to contend with SDS. Pimentel’s findings were recently published in Plant Disease, a leading journal in plant pathology, and her article was selected as the editor’s pick for the month of August.

The findings were that several beneficial fungi that can act as biological control agents, or BCA, were able to reduce the growth of the pathogen that causes SDS.

High soil moisture and colder weather at the beginning of the growing season helps the SDS pathogen prosper, which creates a huge financial problem in the Midwest and north-central regions of the United States.

“What excites me most about this research is that applied side of it,” Pimentel said. “We generated knowledge that could be applied in soybean production to help manage SDS, which is a very difficult disease to control and causes so much economic losses for the farmers.”

Pimentel said the research “opens doors for the ag industry to explore the promising biocontrol agents that we characterized and develop cost-effective products with optimized formulation that can be available for farmers to manage SDS.”

“The ag industry could also expand this research in terms of testing the developed products against other important diseases in soybean and other crops,” she said.

Pimentel’s pathway to immersing herself in the biological control of plant diseases came when she volunteered in Fakhoury’s lab, where she had the opportunity to participate in an ongoing project to study fungi associated with diseased soybean seedlings. This led to the discovery of fungi that could potentially protect soybean seedlings from diseases.

The university is home to the Illinois Soybean Center. With Illinois the No. 1 soybean producing state in the nation, SIU Carbondale is geographically and environmentally in a unique position to address problems of soybean management that manifest at the state, regional and national levels.

With collaborators in Michigan and Iowa, Pimentel also examined the beneficial fungi activity against Pythium damping off, another devastating disease on soybean seedlings.

“There are a lot of livelihoods at stake here,” Fakhoury said. “We’re always looking for ways to ensure the profitability and sustainability of soybean production.”

Pimentel said that soybeans in her native Brazil have similar issues, only with slightly different pathogens causing the same disease.

“This is a really exciting moment to explore these interactions,” Fakhoury said. “There is a lot to be studied in these organisms at a molecular level.”