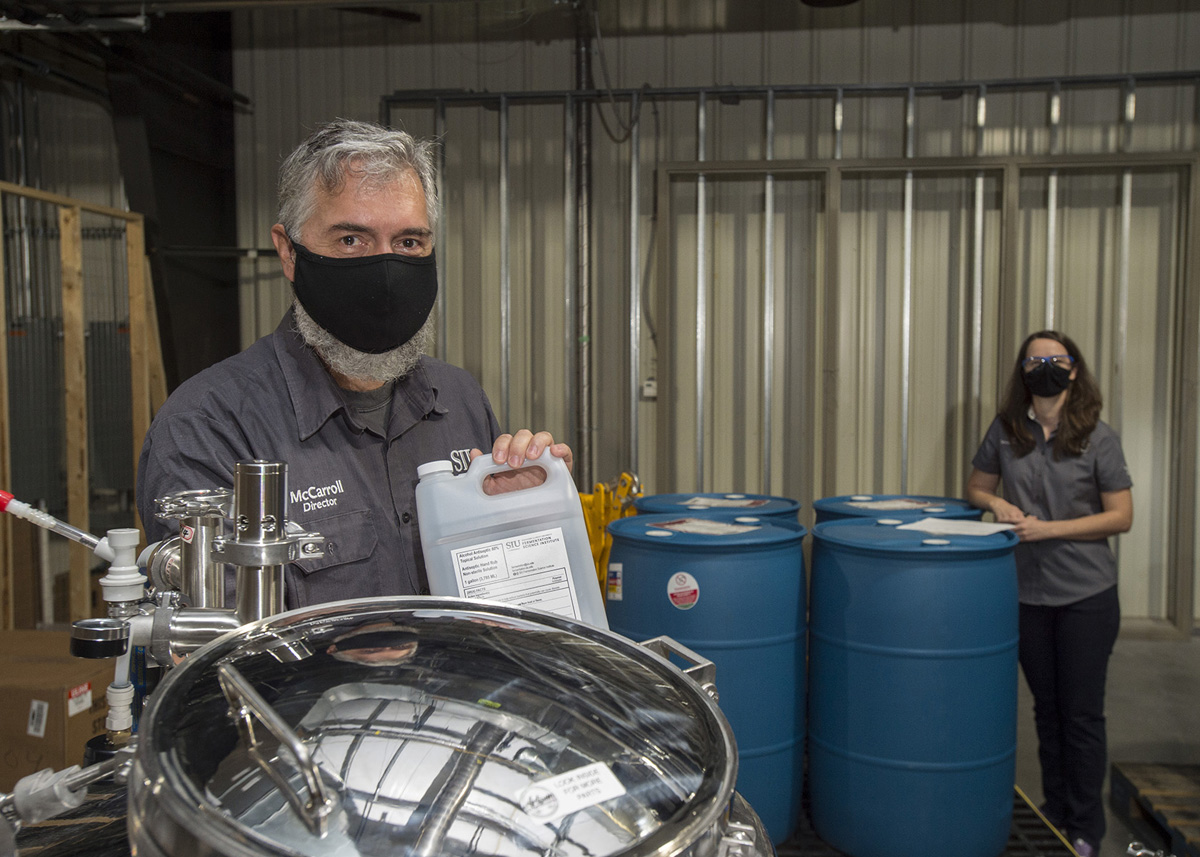 Matt McCarroll, left, and Amanda Rothert, right, of SIU Carbondale’s Fermentation Science Institute, show the first batch of “Saluki Sanitizer” facility is making for use on campus. They found the institute could produce a cleaner hand sanitizing product than most available commercial versions at a significantly lower cost. (Photo by Russell Bailey)

CARBONDALE, Ill. — The mixture might not be barley and hops, yet the latest products of Southern Illinois University Carbondale’s Fermentation Science Institute will serve a vital role on campus beginning this fall.

The first batch of “Saluki Sanitizer” was produced earlier this month and is ready for distribution for use throughout campus.

Given a major shortage and the high cost of hand sanitizer due to the COVID-19 pandemic, a newsletter from the American Distilling Institute mentioned that some distilleries were moving toward making hand sanitizer. Matt McCarroll, FSI director, said the article prompted him to investigate the feasibility producing the product at SIU

“We spent a little time back in April researching what it would take to produce it and evaluated if it was something we could do,” he said.

McCarroll and Amanda Rothert, FSI lab manager, found that the institute could produce a cleaner product than most available commercial versions at a significantly lower – nearly half – cost.

“I think we are in the time of being creative to make things work,” McCarroll said.

The university’s Plant and Service Operations team provided 55 gallon drums and plans to centrally dispense the product from the 55-gallon quantities, which allowed the FSI to provide a dependable supply at half the market price. Thus far, FSI has produced 276 gallons of hand-sanitizer.

With students returning for the start of the semester next month, officials will monitor how much hand sanitizer will be needed.

“We are equipped and ready to produce what is needed on campus,” he said.

FSI worked with the university’s Environmental Health and Safety office, Plant and Service Operations and building architects and engineers to ensure that the endeavor could be done safely. The 95 percent U.S. pharmaceutical-grade ethanol initially used and the finished hand sanitizer, which contains 80 percent ethanol, are both Class 3 flammable hazardous materials. Proper safety precautions and ventilation are required. The project also required registering with the FDA as a manufacturer.

The 300-liter mixing tank and explosion-proof pump used in making the hand sanitizer were already slated for use later in FSI’s distillery, which is in the final design process, McCarroll said.

Manufacturing the hand sanitizer includes a spirit mixing tank to hold nearly 80 gallons of product and the pump within a closed loop system. Exact amounts of hydrogen peroxide, glycerol, denatonium benzoate and purified water used to dilute the product so it contains 80 percent ethanol are added into the tank before the 55 gallons of ethanol is introduced. The product mixes in the closed loop system and is then sampled to measure for alcohol content. Adjustments to the amount of ethanol or water can be then be made to reach the proper 80 percent ethanol density, Rothert said.

“It’s an advantage that we have a full testing laboratory available,” McCarroll said.

FSI is following the World Health Organization’s formula also recommended by the Centers for Disease Control and the FDA. McCarroll and Rothert noted the formula the university is using is cleaner than many hand sanitizers sold commercially. Due to the pandemic and shortage, the FDA loosened the criteria on the purity of the ethanol for use. While still deemed safe for use, the less pure sanitizer has a stronger odor than that manufactured by the FSI.

McCarroll noted students will have the opportunity to become involved with the project once they return to campus for the start of classes next month. Students will receive safety training and learn to implement a standard operating procedure.

“It will give them an invaluable learning opportunity to work on something that is a little larger scale and on a product that is being brought to market,” he said.

Available for outside sales

McCarroll noted that each batch produces about 66 gallons of hand sanitizer, which leaves about 11 gallons after the 55-gallon drums are filled. The remaining hand sanitizer is being packaged into one-gallon containers and plans are for those to become available for sale, he said.