Susana Mendoza, who has served as the state’s comptroller since 2016, will be the special guest speaker for this year’s event, “Votes for Women: A Centennial.”  Tickets are available now for the event, which will be in Morris Library.

The gala is held in conjunction with the university’s annual commemoration of Women’s History Month in March.

Mendoza has served her home state in various roles for two decades. A Chicago native, she is the daughter of Mexican immigrants who relocated the family to the suburbs to escape gang violence. As a youth, the skilled soccer player found herself on a number of all-male traveling teams, thanks to her extraordinary talent.

Mendoza, who earned all-state and all-Midwest honors for soccer in high school, became the first woman to make the Bolingbrook High School Wall of Fame and attended Truman State University in Missouri on a soccer and academic scholarship. After earning her bachelor’s degree in business administration in 1994, she returned to Illinois and began working in advertising/public relations, the hospitality industry and Chicago’s Department of Planning and Development.

The festivities celebrate the successes of women at SIU and in the community and raise money to fund scholarships to help other women reach their goals. Additional honors and awards will go to a number of deserving women as the American Association of University Women and the SIU Women’s Club will present their annual scholarships.

The hour-long reception kicks off at 4:30 p.m. in the library’s rotunda and will include music by harpist Joyce Hesketh along with hors d’oeuvres and beverages. A benefit silent auction, featuring a wide variety of items, will run from 4:30 to 5:50 p.m.

Mendoza’s presentation and the awards ceremony will follow beginning at 6 p.m. in the John C. Guyon Auditorium.

Tickets are available now for Celebrate Women 2020. The cost is $25 per person or $15 for SIU students with a valid ID. To purchase tickets, contact Martha Ellert at 618/521-0613 or by email at msellert@aol.com. 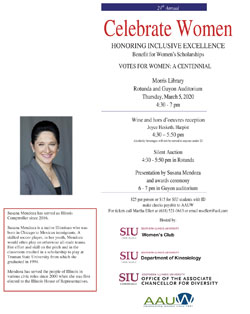