‘The Musical of Musicals’ fills McLeod Theater this week

CARBONDALE, Ill. — Southern Illinois University Carbondale’s Darryl Kent Clark first saw a production of “The Musical of Musicals (The Musical!)” nearly a decade ago. Over the next nine years, Clark, an assistant professor in Theater specializing in musical theater dance, kept the idea of the performance in the back of his mind. This weekend, the hilarious musical will be a reality on the McLeod Theater stage.

“It’s a show that is a great example of how much fun you can actually have with the whole history of American musical theater,” said Clark, who is the director.

The show is Thursday through Sunday in McLeod Theater, which is in the Communications Building. Performance times are 7:30 p.m. Thursday through Saturday and 2 p.m. on Sunday. Individual tickets are $18 for adults and $6 for students.

The Musical of Musicals (The Musical!) is composed of five versions of the same basic story in the styles of Rodgers and Hammerstein, Jerry Herman, Kander and Ebb, Stephen Sondheim, and Andrew Lloyd Webber. It is a performance that connects the works of the great makers of musical theater by re-imagining them side-by-side to be mocked, to be criticized, and inevitably, to be loved.

“It’s a nice, simple story,” Clark said. “Everyone will recognize it when they see the first section.”

The “Musical” production originated in 2004 and Clark first saw it seven years later at Missouri State University. Clark noted that when he was hired at SIU in 2016 it was primarily to teach dance classes and choreograph. After the Department of Theater staff whittled down production options for the 2019-20 school year, Clark was chosen for his first director’s role.

“It was a bit of a surprise, a challenge,” Clark said. “But something I hope I’ve stepped up to. I’m honored fully to have this chance.”

He has even happily taken some artistic liberties, putting in a little more dancing “where I felt room needed to be made.”

The production includes a cast of 16 and Clark believes the audience will enjoy the work put into the costumes, set, sound and lighting.

“Everyone has come together more than admirably as a team,” Clark said. 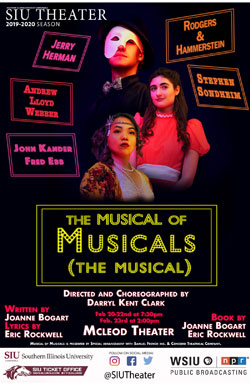