The timing is perfect for “Women’s Voices” the 7-week art exhibit that features a variety of works. The exhibit starts Tuesday in the museum, located in Faner Hall.

“You’ll see everything from puppets to glass, as well as paintings and multimedia work,” said Paulette Aronson, a participating artist of the museum’s Feb. 4-March 21 showcase.

Aronson said the exhibit is the right time for something like this to happen with the current political climate, empowering women in the national discussion, and the anniversary of the women’s suffrage initiative. That initiative, which gave women the right to vote, is celebrating its 100th anniversary as the 19th Amendment to the U.S. Constitution passed in August 1920.

At that point, Teresa Fix, a former assistant director of Carbondale Community Arts who has an extensive knowledge of local artists and their work, approached Stoerger and proposed a show of women’s art centered on a theme of “the need to create.” Fix then began to contact area artists inviting them to exhibit their work.

“We hope this can become a yearly exhibit,” Aronson said.

The exhibit opens Tuesday and runs through March 21. The opening reception will take place from 4 to 7 p.m., Friday, Feb. 7, in the museum.

University Museum is open Tuesday-Friday from 10 a.m. to 4 p.m., and from 1 to 4 p.m. on Saturday. The museum is closed on Sunday and Monday. 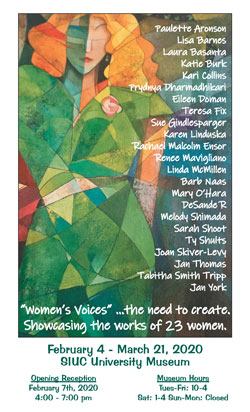