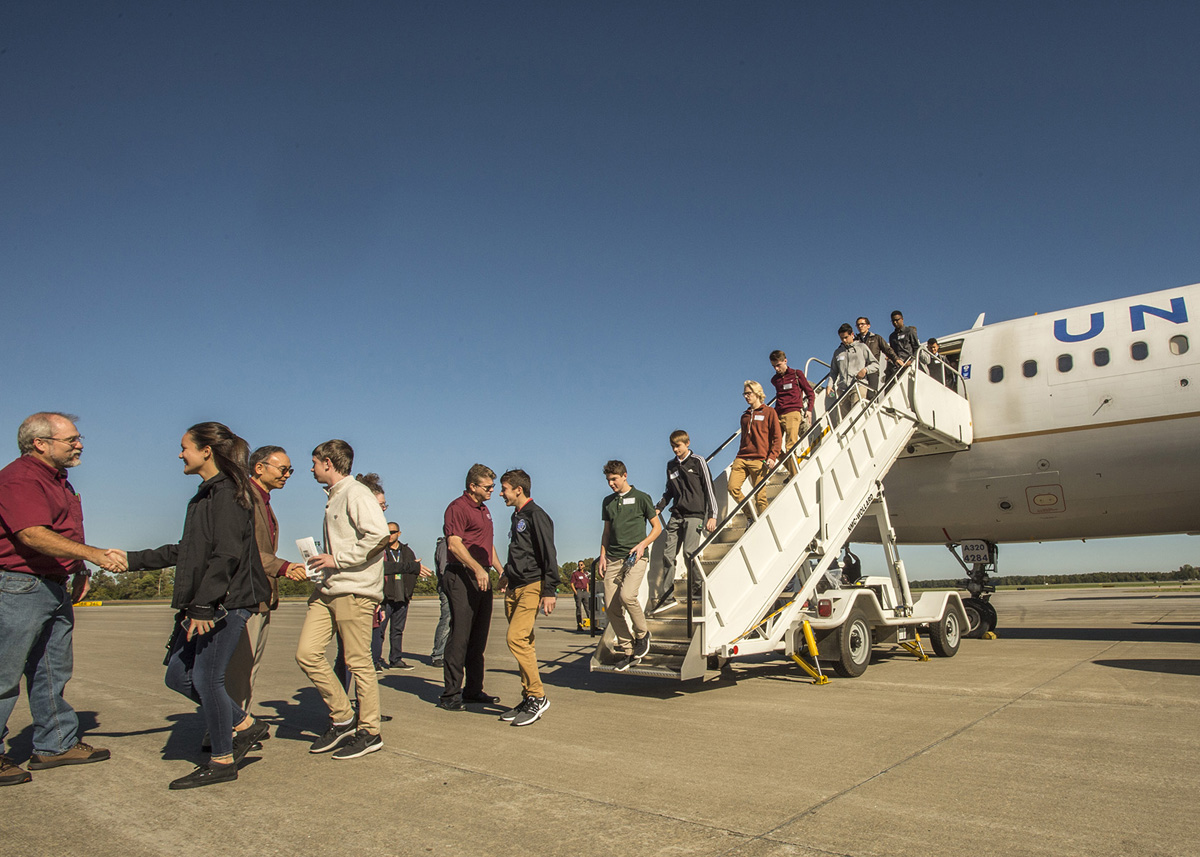 Getting ready to explore a new career opportunity – High school students disembark from a United Airlines flight at Southern Illinois Airport in October 2018 to learn about career opportunities in aviation and SIU’s nationally recognized program. (University Communications and Marketing photo)

CARBONDALE, Ill. — Since 1994, a remarkable aviation relationship between Southern Illinois University Carbondale and United Airlines has strengthened the industry and helped attract outstanding students to a nationally recognized program.

On Saturday, the tradition resumes when a United Airlines Airbus 320 touches down at Southern Illinois Airport for United Airlines-SIU Aviation Career Day, marking the 25th anniversary of that first flight. Aboard will be 116 high school students from the Chicago area and 30 SIU aviation alumni/United Airlines employees to discuss aviation careers and highlight the airline and the university.

Capt. Barry D. Batson, Jr., who was the airline’s first officer on the inaugural flight from Chicago to Carbondale, and Kevin Richardson, a 2002 SIU aviation graduate, will fly as captain and first officer as they did five years ago to mark the 20th year.

“I can’t believe I’m doing this for a career and I’m still extremely grateful to SIU and United Airlines for giving me this opportunity to give something back, said Batson, a 1990 aviation management career graduate. His career with the airline spans nearly three decades.

Reporters, photographers and camera crews are welcome to attend the United Airlines-SIU Aviation Career Day, participate in courtesy flights, and interview students, faculty and alumni. The plane will land at about 8:45-9 a.m. on Saturday. For more information, contact Michael Burgener, chair of the Department of Aviation Technologies and interim chair of the Department of Aviation Management and Flight at 618/536-3371 or burgener@siu.edu.

Chancellor John M. Dunn said United Airlines’ contributions to the aviation program the last 25 years and the work of the alumni volunteers is invaluable to the program’s success.

“It is vital for students who are interested in the many aviation-related fields to receive first-hand insight to the career opportunities available to them,” Dunn said. “Our aviation program is among the nation’s best, providing the necessary education and tools needed for these students to advance and pursue their chosen aviation career. United Airlines is a significant partner in helping us achieve that goal.”

“At United, we have both an opportunity and a duty to help shape what the future of aviation looks like, and engaging students from across our home state of Illinois and from AeroStar helps us to position young people from different backgrounds, cultures and experiences to be leaders in the field,” said Sharon Grant, United’s chief community engagement officer. “Experiences at Southern Illinois University Carbondale like today’s and those of the past 25 years helps to ensure a strong future of aviators.”

United Airlines Capt. Clarence Copping, a Boeing 777 captain and line check airman instructor and 1977 aviation program graduate and retired Captain William R. Norwood were among those involved in making the April 1994 flight happen. Copping and Norwood will be aboard Saturday’s flight.

Norwood, a 1959 SIU Carbondale graduate, served six years in the U.S. Air Force followed by a 31-year career with United Airlines, becoming the company’s first African American pilot and the first to achieve the rank of captain.

Copping said his thoughts are with the past and present United Airlines alumni who donate their time. The volunteers share stories with students, discuss their own experiences and give insight into aviation careers.

Combined with ongoing growth of commercial aviation and retirements “our industry is hard-pressed to acquire the necessary talent to fill its requirements,” Copping said. Since the program’s inception in 1994 Copping said he’s come to know hundreds of SIU alumni who choose to work for United Airlines.

“Our flight to Carbondale is a step in helping to prime the acquisition of future talent,” he said.

The 2019 Boeing Pilot and Technician Outlook project a large need for people within the aviation industry over the next 20 years. Experts predict 804,000 new civil aviation pilots, 769,000 new maintenance technicians and 914,000 new cabin crew for a worldwide fleet in commercial and business aviation and civil helicopter industries.

Knew he wanted to come to SIU

Luke Williamson, is a junior in aviation program from Buffalo Grove, president of the school’s Aviation Management Society registered student organization and an Aviation Ambassador. He has his commercial pilot’s license and is now working on a multi-engine license.

Williamson, 20, came to an SIU Aviation-United Career Day as a youngster and again when he was a student at Stevenson High School in Lincolnshire. Williamson’s father, David, also an SIU alumnus, is a first officer with United on the Boeing 777 and will be on the plane on Saturday.

Williamson had an eye toward an aviation career but connecting with airline professionals who were once students was also pivotal in his decision. Williamson said he visited a few other aviation universities but knew he wanted to come to SIU.

“If you work hard and do the right things you can be doing the exact same things these guys are doing,” he said. “It was exactly what I wanted. It wasn’t too big, it wasn’t too small. The program has deep roots.”

SIU is the only university that works with a major airline to fly students to its campus for an aviation career day.

“This partnership has been very effective over the years in introducing Chicago area high school students to aviation careers.  We are excited to celebrate this anniversary flight and we look forward to it continuing for another 25 years,” Mike Burgener, chair of the Department of Aviation Technologies and interim chair of the Department of Aviation Management and Flight, said.

Many alumni and university officials deserve credit for keeping the program going through the years, said Batson, crediting Dave NewMyer, retired aviation program department chair, and Norwood with getting the event off the ground.

“In 1994, I was extremely grateful for the opportunity to work the first flight from O’Hare to Carbondale,” said Batson, a captain with the airline for 22 years. “At that time I knew the importance of giving back, however, it never occurred this would continue for 25 years.”

Richardson has been with United Airlines since December 2013. After graduating from SIU, he worked for Chicago Express and Republic Airways. Richardson said he never imagined “being fortunate enough to participate in this important event.”

Important for alumni to give back

Batson hopes students on this year’s flight are excited to visit “a top university with one of the best aeronautical programs in the country.”

“SIU Aviation holds a very special place with me,” Richardson said. “Being the best aviation school in the country, it gave me the tools to pursue and succeed in my career preferences. My hope is that this event inspires the students to have a clearer vision of their educational path.” 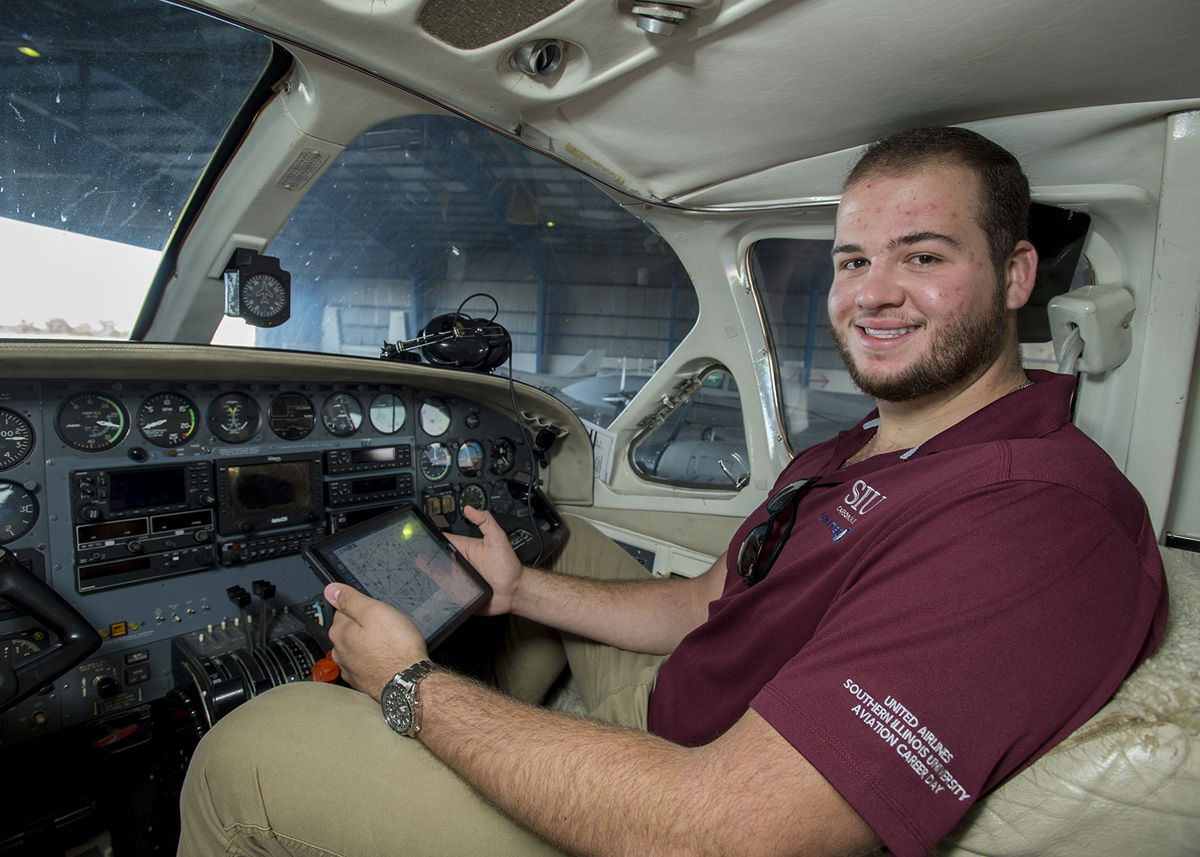 Luke Williamson, a junior in the aviation program, attended a United Airlines-SIU Aviation Career Day while in high school. He is president of the program’s Aviation Management Society and is an Aviation Ambassador. (Photo by Russell D. Bailey)

Luke Williamson, a junior in the aviation program, attended a United Airlines-SIU Aviation Career Day while in high school. He is president of the program’s Aviation Management Society and is an Aviation Ambassador. (Photo by Russell D. Bailey) 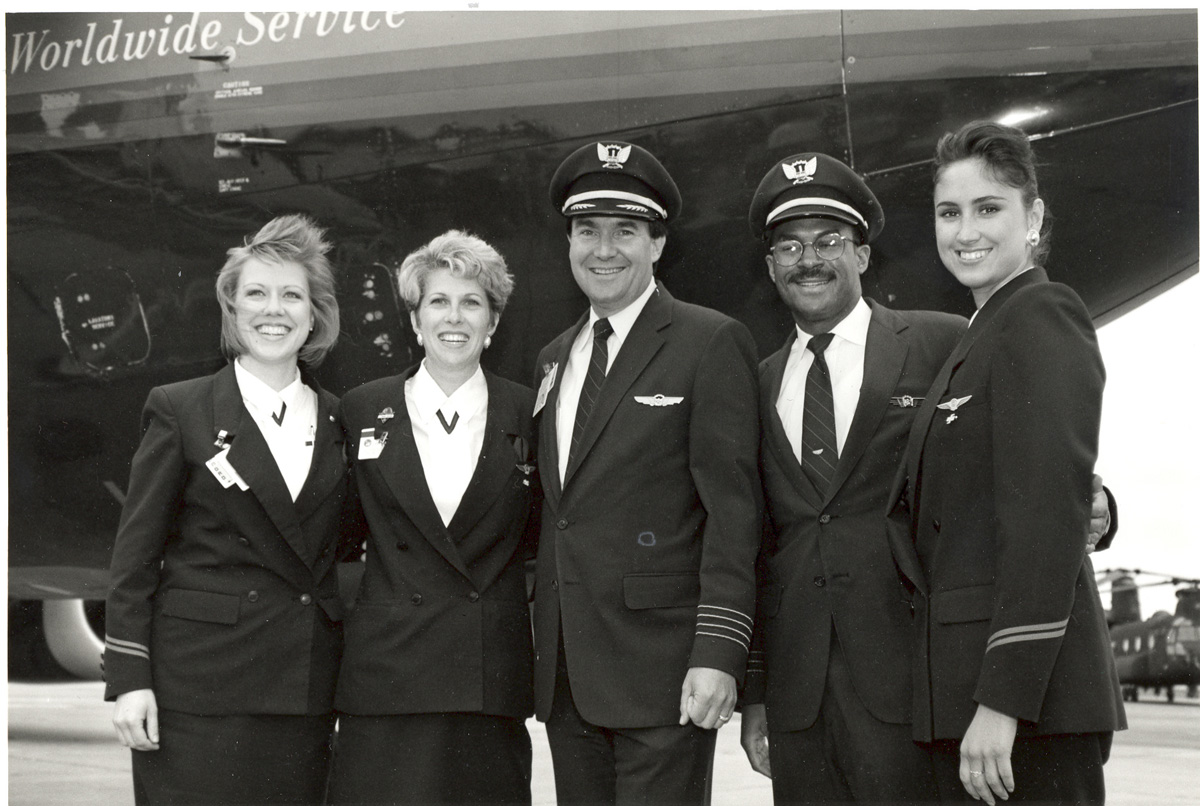