Patwardhan will screen and discuss his latest film, “Vivek (Reason)” from 4 to 7 p.m. in Morris Library’s John C. Guyon Auditorium. The program is part of the Charles D. Tenney Distinguished Lecture Series.

Admission is free and the event is open to the public.

This new film pertains to India, but Jyotsna Kapur, University Honors Program director, said the film is a wake-up call to anyone throughout the world including Carbondale.

“I think many of us are worried about a rise in violent sectarianism the world over, along with the fragmentation of society into individuals and groups who live in their own bubbles of reality manufactured by the media they consume,” Kapur said. “Patwardhan traces the rise of authoritarianism in India. It is a history that is relevant globally to understanding how precious democracy is, how it is tied to the very human desire for freedom and justice — and how cruelly it can be taken apart.”

Kapur said the 69-year-old Patwardhan’s visit to SIU is a stroke of terrific timing. He is a featured presenter at a conference on South Asia next week at the University of Wisconsin-Madison and was able to be the Tenney Distinguished Speaker at SIU.

Virtually all of Patwardhan’s documentary films have faced censorship in his home country of India. Regarded for his strong sense of truth, Patwardhan has had to fight protracted battles in courts against censorship. He embraces these conflicts as necessary in testing and expanding democracy. 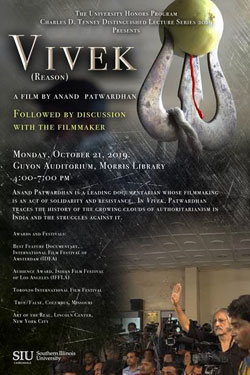