Beginning July 22, in coordination with RIDES Mass Transit, which operates Saluki Express, a number of changes are taking place on that route, known as the Chestnut Route. The changes include the addition of some mid-day runs.

Adjustments are being made in the locations where the shuttle will stop in both cities. The bus has been making two pick-up stops (one near the ATM and one near Save-A-Lot) within the Du Quoin Southtowne Shopping Center area.

As of Monday, the shuttle will pick up and drop off exclusively at the bus shelter located in downtown Du Quoin, a block south of the Amtrak station.

Changes are also coming to the pick-up and drop-off locations in Carbondale. Stops will be made at SIU’s Student Center and physical plant for northbound and southbound routes and at the Carbondale Amtrak station on the northbound route.

However, the shuttle won’t be stopping at the Rebound program location on North Oakland Ave. after Friday.

SCT will continue to operate two morning and two afternoon shuttle runs between the two communities but the company is also adding two mid-day runs which will stop at all locations except SIU’s physical plant.

Find the updated schedule, including locations, times and pricing, in the online brochure. For more details, you may also visit southcentraltransit.org or call 800-660-7433. 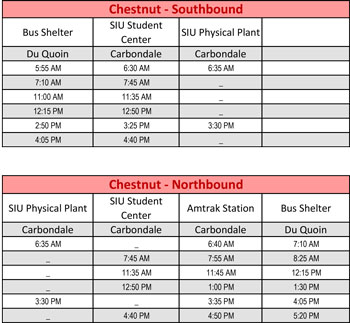