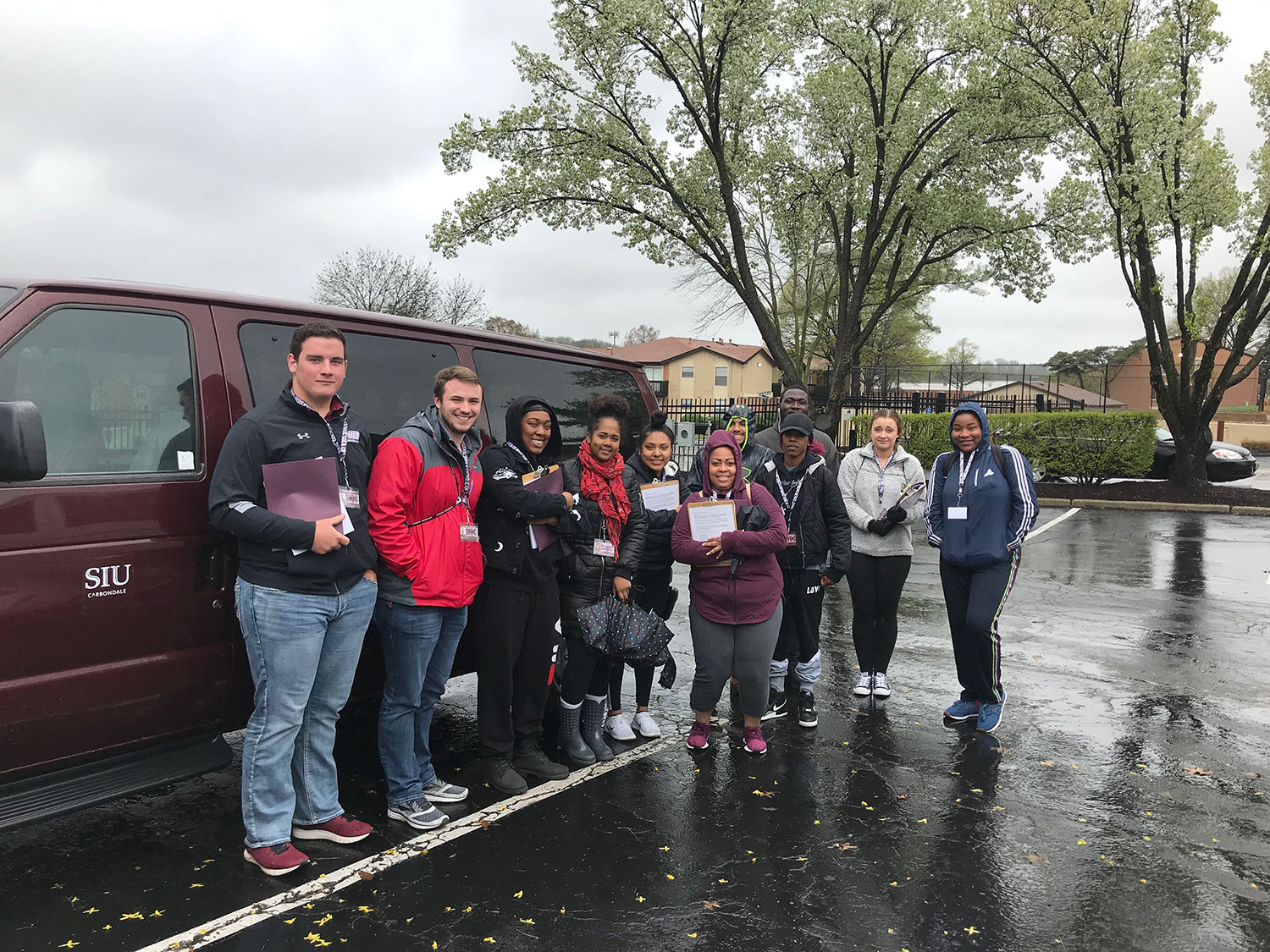 A team of SIU students and researchers are bringing reform to one troubled St. Louis County neighborhood

CARBONDALE, Ill. — One neighborhood in the St. Louis County is facing more than its fair share of crime. Thanks to a new grant, researchers from Southern Illinois University Carbondale are working with local law enforcement to transform the community.

While only 0.72 percent of the total population of the county, the Castle Point neighborhood contributes to double the amount of crime in proportion to the population. The neighborhood stretches less than half of a mile, but in just 14 months police recorded over 410 gunshots from the area.

With the goal of finding new solutions to overcome crime in the troubled neighborhood, researchers from SIU and the St. Louis Count Police Department recently received a grant to broach new reform.

Working to overcome crime in a high-risk neighborhood

The St. Louis County Police Department received a community-based crime reduction grant from the Bureau of Justice Assistance, with SIU acting as a sub-contractor. The total funding was one million dollars, with SIU receiving a small portion for their part of the project. The funding period lasts for three years, with the group making plans for long-term sustainability in the neighborhood.

After working with the St. Louis County Police Department on previous hot spot policing research, Tammy Kochel, professor of criminology and criminal justice at SIU and lead researcher on the project, jumped right in to assist with the project.

The goal is to determine why Castle Point is experiencing higher rates of crime and what initiatives might help decrease the problem, and then to use the small area as a case study for future locations.

Castle Point faces many unique challenges, with over 60 percent of the homes acting as rentals and 25 percent of the homes vacant. The lack of permanent residency gives more opportunity for disregard, while the vacancies lead to a variety of problems such as people dumping trash and waste, trespassers setting up drug locations and criminals stashing illegal guns or goods.

Forty-three percent of those living in the neighborhood are single parent households, with child poverty rate at 50 percent. Only eight percent of the residents hold a college degree, compared to 23.7 percent in the rest of the county.

The first nine months of the grant, the team worked on collecting and analyzing current data about the neighborhood. Using a standard protocol, students visited the neighborhood and recorded a variety of social and environmental factors to build a basis for the study.

They logged anything that might be a symptom of order or disorder, including the amount of garbage, the presence of people interacting in a friendly way or in a hostile way, abandoned homes, speeding cars, broken streetlamps and more.

The students also conducted surveys in both Castle Point and two comparison neighborhoods. They asked questions about subjects such as crime, people’s willingness to exert social control, gun violence, physical and social disorder, crime reporting practices, and the general view toward police.

The surveys acted as a baseline of comparison. At the end of the funding period, the students plan to return and check back to evaluate changes and better understand the success rates of the various initiatives.

Analyzing the number of shots fired in the neighborhood

In addition to the systematic social observations and surveys, the group also spent considerable time analyzing data to draw important correlations. While the group looked at many problems surrounding the neighborhood, their focus was the number of shots fired.

Working with the St. Louis County Police Department, the team analyzed data from Shot Spotter, a company providing info to law enforcement on the location and time of shots fired and examined countless variables in relation to the location and frequency of the shots.

They created over 100 different maps, calculating everything from the time of day of the shots to the presence of streetlamps and vacant homes.

“We looked at a ton of factors in a variety of different ways,” Kochel said. “We looked at darkness, we looked at vacancies and we looked at the co-occurrence of drugs and part-1 crimes, a higher level of crime as distinguished by the FBI, with the shots.”

The data combines to help the researchers understand various factors and build a successful plan to overcome the challenges in the neighborhood.

The project included a wide variety of groups and individuals, including local grassroots organizations, housing and development, public works and community members. Various committees joined the initiative, with everyone meeting four times a year to discuss the changes.

“The goal is to sustain the effort beyond the life of the grant,” Kochel said. “That’s why we involve local folks in the neighborhood and give them leadership.”

Based on the results the team found, they reported their ideas to the police department for potential crime reduction and neighborhood improvement. After collecting the initial data, the team assembled several new ideas to strengthen the neighborhood, naming their campaign after the neighborhood title: Community Advocates for Safety Together With Law Enforcement.

The first initiative is the concept of summer camps, run by Artworks, one of the grant partners.

The goal of this event is to employ teenagers from the neighborhood to paint jersey barriers, large concrete barricades, which they will then place in front of the worst vacant homes. The group also plans to paint boarded up windows and doors to help the neighborhood feel more inviting and peaceful.

Another initiative the team is undertaking is to work with the county to forgive the tax debts on vacant homes that are already possessed by the county. This allows developers to purchase the property without the extra consequence of owed back taxes.

Directed patrol activity will also increase in the neighborhood, allowing officers to visit specified hotspots in the community. As part of the experiment, the group will evaluate the effectiveness of the extra police presence in two-, four- and eight-week segments. The goal is to find the most effective system for deterring criminal activity.

One of the main plans in the neighborhood is the addition of surveillance cameras around the abandoned houses and license plate readers at the entrance of the neighborhood. The team hopes this will reduce the amount of illegal dumping and add an extra deterrence to crime activity.

Clean up is a big part of the action plan, with community members jumping in to get the neighborhood in better shape. The team also distributed refrigerator magnets with a phone number for people to call when they witness illegal dumping.

The team also proposes to add new lighting in the neighborhood to deter the crime, as well as buy a metal detector to help law enforcement officials find metal casings after a shots-fired incident. A final request from the grant is for a Bobcat machine to further clean up and reform the neighborhood.

Goal is to strengthen the community

Kochel’s goal is for people to feel safer, to be more willing to work with the police and for crime rates to go down.

“For me, it’s all about the community,” Kochel said. “Even when I wrote the proposal my heart was for the community. I have worked here before and know there is potential, but due to various circumstances people are really struggling.”

Once completed, the published research will assist other researchers and law enforcement officials with the hope of strengthening other similar communities.