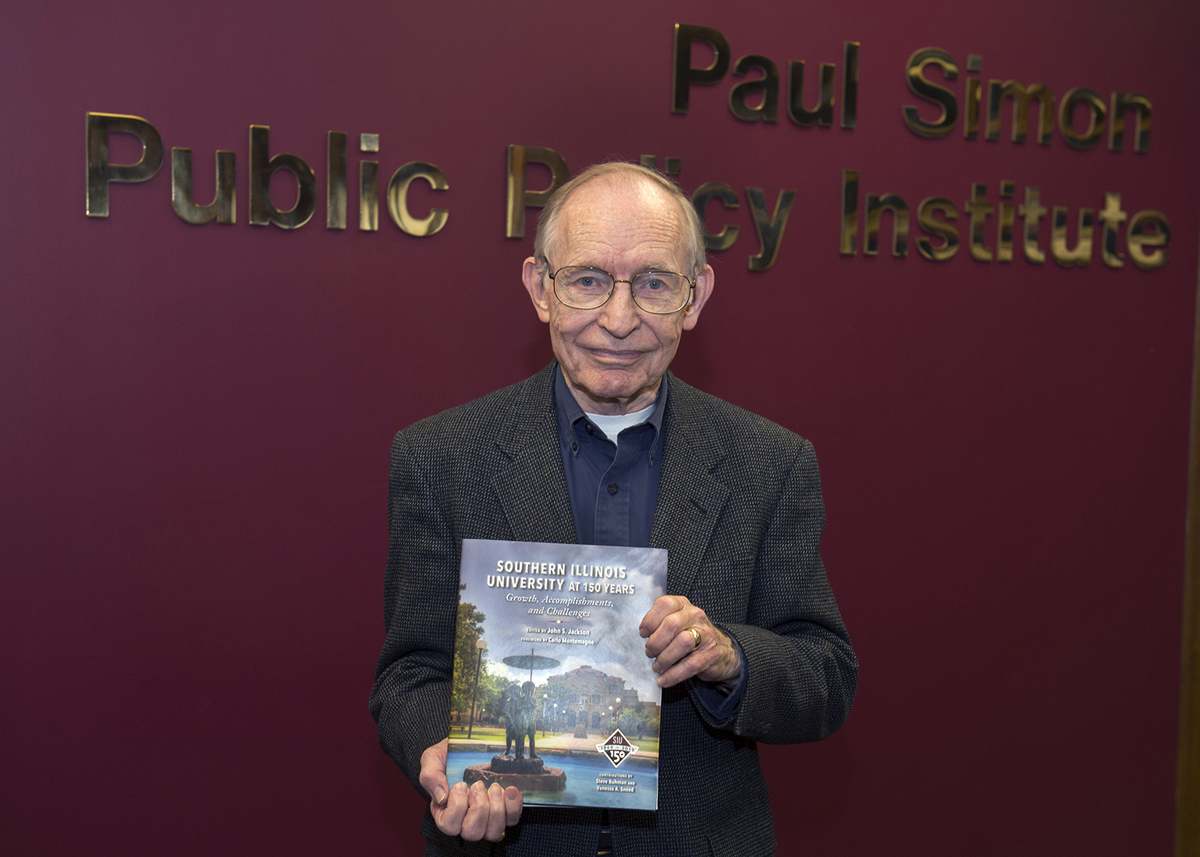 CARBONDALE, Ill. — Since it began in 1869 as a small teachers college, Southern Illinois University Carbondale has evolved into an internationally known research university, with countless notable alumni, innovations and accomplishments.

“Southern Illinois University at 150 Years: Growth, Accomplishments and Challenges” tells the tale of that evolution through hundreds of photographs, personal recollections, records and stories. Copies of the 384-page hardcover coffee table book are now on sale and a special book signing is set for 3-6 p.m. on March 22 at the Student Center Auditorium and International Lounge. Editor John S. Jackson, visiting professor at the Paul Simon Public Policy Institute and political science professor emeritus, along with many of the book chapter authors and contributors, will be on hand for the event.

SIU President J. Kevin Dorsey, Chancellor John M. Dunn and Jackson will share remarks and a reception will follow. The public is welcome.

Books will be available for purchase on March 22, as well as online. The cost is $40.

While the book recognizes the university and its history since its founding, the volume largely focuses on the last 50 years. Dozens of people were involved in writing its 15 chapters, which touch on virtually every element of the university. Stories and photographs highlight Saluki sports, student life, continuing education, Touch of Nature Environmental Center, programs, art and campus buildings, programs and activities. Little known historical details are included, along with spotlights on notable faculty, staff, alumni and guests. The various authors lend personal perspectives to the narrative as they speak about parts of campus that they know well.

“The book is historical but it includes memories and puts them in context,” Jackson said. “Everybody can find something of interest in it.”

Indeed, Jackson has personally watched history unfold at SIU for the last half-century. He arrived on campus as a faculty member in 1969. He clearly remembers the political unrest of the era, and tells how he and other faculty patrolled the buildings at night during the May 1970 anti-Vietnam War demonstrations and riots. The university was concerned for the safety of the buildings since Old Main had burned on June 8, 1969. An arrest was never made in that arson, and no other buildings burned.

Not the first time campus suffered a significant fire

That wasn’t the first time fire struck SIU. Normal Hall was completed in 1874 to house Southern Illinois Normal College, as it was then known. Fire destroyed the structure just nine years later, despite firetrucks coming via train from Cairo and Murphysboro to help battle the blaze.

Noting that the university’s  first-year budget was $24,000, Jackson said there were fears SIU would be no more since  the legislature met just every other year and  funding to rebuild wasn’t quickly available. But classes met in downtown buildings and local residents gave money to rebuild what was later known as Old Main. This is but one of countless interesting facts detailed in the book.

SIU’s long history of diversity and inclusivity is illustrated with information about SIU admitting African-Americans in the 1880s and 1890s, long before other universities were desegregated. Alexander Lane, the first black male graduate, was born in Mississippi but after graduating SIU, became a school principal and later a medical doctor and then one of the earliest African-American members of the Illinois General Assembly. SIU admitted its first international student in the 1940s, Saad Jabr, from Iraq. Jabr was just the first of tens of thousands of international students from more than 100 countries who have come to Carbondale and graduated from SIU in the ensuing years.

The research and innovation that are an intrinsic part of SIU are noted as well. The university holds numerous patents and is at the forefront of investigation and discovery, from finding ways to improve the use of coal and fossil fuels to brewing better beer in the Fermentation Science Institute. SIU’s people have long been at the forefront of discovery, and the book tells of such visionaries as R. Buckminster Fuller, the architect, futurist, inventor and sustainability advocate who was a campus architecture faculty member from 1959 to 1971. He holds a number of patents, including one for the geodesic dome and for the Dymaxion car.

Many aspects of SIU are featured

Readers can also learn about campus leadership through the years, including the transformational Delyte Morris era, as well as the School of Medicine, the School of Law, Morris Library, the graduate school and programs and the campus facilities. There’s information about many of SIU’s special programs of distinction, including the:

The narrative not only features the programs, but also highlights various interesting aspects of them. For instance, SIU’s University Honors Program, which draws some of the best and brightest students, also has notable leaders, as evidenced by the fact that Janice Jacobs, former assistant secretary of consular affairs for the U.S. State Department, is a visiting faculty member.

Photos and details about campus appearances by Coretta Scott King, Walter Cronkite, United Nations Secretary General Ban Ki-moon and many others are part of the book. You can also discover some of the countless notable Saluki graduates, including NASA/space shuttle astronaut Joan Higginbotham, actor Dennis Franz, activist/actor Dick Gregory (who was a track star at SIU,) and so many others. The text doesn’t shy away from the difficulties and issues the university has faced throughout the years as well, from budget concerns to campus riots.

More than 300 photographs, collected by longtime university photographer Steve Buhman, are woven throughout the narrative. Vanessa A. Sneed, director of University Events and Protocol, assisted with the book, which is published by Southern Illinois University Press. It features a foreword by the late Chancellor Carlo Montemagno.

The book is available in both cloth and digital versions as well.

Additional book signings at various locations are planned and copies of the book will be available at a variety of 150th anniversary events in the coming year. The book is also available for purchase at Southern Illinois University Bookstore on campus, at 710 Bookstore and on Amazon. 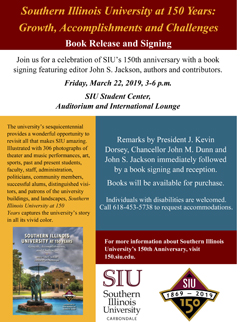