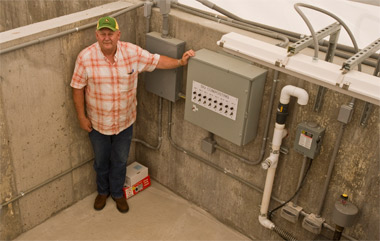 New composting facility -- Myron Albers, site manager and senior lecturer in the Department of Plant, Soil and Agricultural Systems at Southern Illinois University Carbondale, stands next to a control panel in the air composting facility that will open July 1. Personnel will monitor and control the oxygen and moisture flow to the composting materials.  The facility will be able to take 87 tons of dining hall, livestock and landscape waste annually.  (Photo by Steven Buhman)

CARBONDALE, Ill. -- Eighty-seven tons of food scraps is a lot of waste -- until it’s turned into a marketable byproduct.

Southern Illinois University Carbondale increased its commitment to sustainability with the construction of a new composting facility this year. The facility, set to open July 1, has the potential to annually take 87 tons of dining hall, livestock and landscape waste and turn it into saleable compost.

The facility utilizes forced air composting, also known as aerated static pile composting.  The system is ideal for large-scale food service waste management such as that produced by residence halls.

What makes it ideal? Volume, in part. SIU’s facility is comprised of eight bins, each 12 feet in length by 10 feet wide and 6 feet deep, and capable of holding 240,000 pounds of waste if filled to capacity.  It’s twice the size as the facility after which it was modeled and is now the largest in the Midwest.

It’s not just the quantity that makes this system top grade -- it’s also the efficiency.  From drop off to finish, the composting process will take 60 to 70 days.  The aeration process is key. The forced air, which enters the bin from the floor, eliminates the need to turn over or rake the compost for oxygen-exposure. In addition, site personnel and researchers can regulate the temperature, moisture and oxygen flow, manipulating the decomposition process that leads to compost. The natural process is also environmentally sound, with no fossil fuels in use, and with a product that has low odor and a low incidence of pests.

Site manager and College of Agricultural Sciences faculty member Myron Albers was among several people from SIU to visit Appalachian State University where a similar system is in place. Albers along with Kris Schachel, sustainability coordinator, and Phil Gatton and Justin Harrell from Physical Plant Services, took notes, asked questions, and made a few changes to accommodate SIU’s specific needs when construction time came.  Some of the SIU innovative alterations include a gutter and storage system that will make rainwater the main source of added water for the facility. That innovation, Albers said, is part of the plan to make the facility almost completely self-sustaining.

Albers said the system can break down all organic waste.  While that now means mostly dining hall waste, livestock and landscape waste will also be recycled into compost.

Other innovations SIU incorporated -- namely, putting the bins in a single row rather than in double rows facing each other -- will make it easier to bag the final compost product.

While some of the compost will be used on campus, the facility is meant, ultimately, to produce a consistent and marketable compost product that can be bagged and sold.

Rachel Cook, assistant professor in the Department of Plant, Soil and Agricultural Systems, said the compost will be useful for local gardeners, and perhaps larger-scale organic farmers, as well.

“The great thing about this facility is that it will be used for research, for recycling waste, and it’s for the community as well,” she said.  “This is something where people can see what we are doing, how we are using research to promote sustainable practices and in a way that can directly benefit people in the area.”

Mickey A. Latour, dean of the College of Agricultural Sciences, agrees Cook’s hopes for the facility.  “Research is a high priority for this college,” he said, “ and so is sustainability, including economic sustainability.  We want to build relationships within our college community and within the Southern Illinois region; we want to build a bridge between academics and entrepreneurship; and we want our students to benefit from all this.”

After acquiring the permits necessary to start, the launch will give officials the opportunity to see how it will all work in practice before the start of the 2014-15 academic year in August and the volume of dining hall waste increases.

The student-supported Green Fund paid $103,000 for construction of the new facility, supplemented by an Illinois Department of Commerce and Economic Opportunity grant of $50,000.