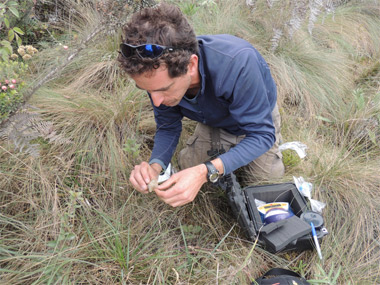 Temperature research -- Southern Illinois University Carbondale’s Alessandro Catenazzi, assistant professor of zoology, sets up a sensor that models a frog’s body and its ability to retain and lose water under different conditions, as well as temperatures in Peru’s Andes Mountains. Catenazzi recently led a study of frog populations there, which found that a fungus that is killing frogs at higher elevations and that climate change may eventually threaten lowland frogs, as well. (Photo provided)

CARBONDALE, Ill. -- They say a frog will sit in a pan of water until it is cooked, if the heat is turned up slowly enough.

A Southern Illinois University Carbondale researcher studying the effects of climate change on Peruvian frogs recently put his own, considerably more humane, spin on this question while investigating just how much temperature increases affect the amphibians’ ability to survive.

Alessandro Catenazzi, assistant professor of zoology in the College of Science at SIU, also found that a mysterious fungus that has been decimating amphibians in rainforests and “cloud forests” of South America is not being exacerbated by climate change, as some have theorized.  His findings will be published online today (Dec. 13) in the scientific journal “Conservation Biology.”

Catenazzi, who was the lead author on the article along with Edgar Lehr from Illinois Wesleyan University and Vance Vredenburg from San Francisco State University, said the team wanted to further research the rapid decline of amphibians that has occurred during the last 20 years, a phenomenon well documented by researcher Karen Lips during her time at SIU.

Catenazzi was among those who ventured into the Kosñipata Valley, an area bordering the Amazon rainforest on the eastern slopes of the Andes Mountains in Peru.  Much of the area falls within the boundaries of  a large national park, which has very few points of entry or roads and is populated only by animals and isolated native tribes who are out of contact with civilization. The researchers worked at Wayqecha Biological Station, a private protected area adjacent to Manu National Park and owned by the Amazon Conservation Association.

“Because of this, it is fairly pristine, and a good area for this kind of research,” said Catenazzi, who conducted his research between 300 and 4,000 meters in elevation on the slopes.

Catenazzi previously conducted research as an undergraduate student in the area during the late 1990s.  This past data provided him a baseline to measure current frog populations against, and what he found was alarming.

“At some elevations, about half the frog species were missing,” he said.  In the lower lands, the populations were doing OK, but between about 1,000 and 2,000 meters we saw a large decline.”

Scientists place the blame on an outbreak of a specific fungus, “Batrachochytrium dendrobatidis,” which wipes out frog populations essentially by inhibiting their skin’s ability to help them breathe and stay hydrated.  Such infections cause electrolyte imbalance, which can lead to cardiac arrest.

Some scientists have theorized that climate change may be promoting the fungus’ ability to grow and infect more frogs. But the group’s research cast doubt on that theory and pointed more in the direction of fungal infections, as the temperature ranges the researchers measured at higher elevations were ideal for the fungus to thrive.

“The elevations where the temperature was best for the fungus was also where we had the most missing species,” Catenazzi said.

Even so, climate change may still pose a threat to the besieged frog population, Catenazzi said.

The findings bode ill for frogs living in the lowlands, which appeared to have a much lower tolerance -- only about 2 to 4 degrees centigrade -- for rising temperatures than those living at higher elevations.

“If temperatures continue to climb, then our research indicates those frogs will be affected,” Catenazzi said. “In higher temperatures, their metabolism will rise and they will need more food to survive and they will starve or become easier prey.” Also, in the lowlands the opportunities for seeking colder temperatures are limited for frogs, and unless they can migrate to higher elevations they will succumb to warmer temperatures.

The study is important because it tells scientists and conservation-minded people that solutions are complex, Catenazzi said.