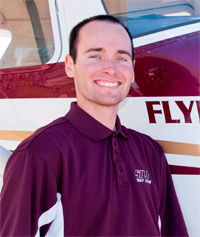 Paced by co-captain Dane K. Fearneyhough who earned top pilot honors and was the top scoring contestant, the Flying Salukis put six team members in the top nine slots to easily earn a sixth regional title in seven years.  The finish marks the 44th time in 45 years that the eight-time national champion Flying Salukis will qualify for national competition.

After winning the national title in 2011, the Flying Salukis have finished third in the nation each of the past two years.

The top three teams in the region earn automatic berths to NIFA’s national competition, May 12-17, at The Ohio State University.

Freshman George H. Nimmer was first in the simulator ground trainer event while sophomore Kevin D. Grandberry, Jr. repeated his first-place finish in aircraft recognition from last year.  Nimmer and Grandberry are both aviation flight majors.  Sean S. Gipe, a junior in aviation technologies, was first in aircraft preflight inspection, and the team of Armstrong and Michael T. Maughan, a senior in aviation flight were first in the message drop competition.

Nathan J. Lincoln, Flying Salukis coach and a senior lecturer in the Department of Aviation Management and Flight, was pleased with the performance from a predominantly young team.

“This was a really good competition for a relatively junior team,” he said.  “We have a lot of newer team members and even the new students we brought in this semester competed very well in their events.”

In winning their events first-year team members Gipe and Nimmer were able to go from having no experience to winning individual titles in the space of five weeks, said Lincoln, who was impressed with how the team competed throughout the week.

“I wasn’t sure want to expect because we have had so many graduates the last two years. For the new team to come together and compete so well is pretty amazing,” he said.

In all, 12 of 18 team members scored points during the event.

“I’m hoping this is a promising sign of what we are going to have for the next couple of years, although you never really know,” he said.  “You don’t know how much other teams are losing to graduation or able to keep other team members.”

The Flying Salukis’ history is not lost on new team members, Lincoln said.

“The longer that we are successful at both the regional and national competition the team embraces the fact that we are a top flight program in the country and they embrace the extra effort it takes to be able to do this year after year,” he said.

The three programs that comprise the university’s aviation program -- aviation flight, aviation management, and aviation technologies -- are in the College of Applied Science and Arts.