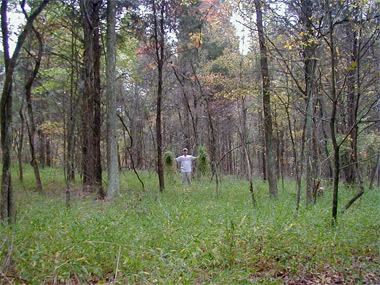 Invasive plant problem -- Greg Spyreas, a former graduate student at Southern Illinois University Carbondale, holds tufts of Japanese Stiltgrass while standing amidst a growth of the plant in the Shawnee National Forest.  University researchers have been working on the issue for years and played host to a summit that featured their colleagues from around the country.  The results of the summit are now contained in a recently Internet-published white paper paid for by a grant from the Illinois Department of Natural Resources.  The paper summarizes the many presentations, discussions and research presented at the summit and will serve as a valuable resource for land managers struggling to stem the Japanese Stiltgrass tide.  (Photo provided) Download Photo Here

CARBONDALE, Ill. -- Almost 100 years ago, the theory goes, a company in Knoxville, Tenn., received a shipment that contained a fateful packing material.  It wasn’t long before the bushy Japanese Stiltgrass that cushioned the goods was growing along a nearby stream bank.  And growing, and growing…

To see the results of that long-ago event, area residents need travel no further than Southern Illinois’ majestic Shawnee National Forest, where Japanese Stiltgrass has taken up residence with a vengeance.  The invasive plant carpets acres of the forest, crowding out other native plants, changing soil conditions and worsening fire hazards during dry years.

Researchers at Southern Illinois University Carbondale have been working on the issue for years and played host to a summit that featured their colleagues from around the country.  The results of the summit, in August 2010, are now contained in a recently Internet-published white paper paid for by a grant from the Illinois Department of Natural Resources.  The paper summarizes the many presentations, discussions and research presented at the summit and will serve as a valuable resource for land managers struggling to stem the Japanese Stiltgrass tide.

David Gibson, professor of plant biology at SIU Carbondale, said the University worked with the River to River Cooperative Weed Management Area to organize the summit.  The CWMA works in counties south of Interstate 64 to combat invasive plants and educate the public on the threat they pose.

About 75 people, including representatives from the U.S. Forest Service, the state Department of Natural Resources and other agencies, attended the two-day event, which included presentations and field trips, Gibson said.  Then recently, doctoral student Karla L. Gage reviewed the taped presentations and images and put together the summary.  The full paper can be found at OpenSIUC at http://opensiuc.lib.siu.edu/pb_reports/3/ and the River to River CWMA website at http://www.rtrcwma.org/stiltgrass/.

Japanese Stiltgrass first was discovered in the United States in 1919 as it grew along a streambed near a warehouse in Knoxville.  An annual, it rises new from seed each year, growing long, thickly tangled branches several feet long.

“People figured it had been used as a packing material, like straw,” said Gage, a doctoral student in plant ecology from Selmer, Tenn., who summarized the summit and wrote the paper. “No one knows for sure how it got here.”

One thing for sure, however, is that once it gets somewhere, it’s hard to get rid of. The plant creates numerous tiny and sticky seeds, both in flowers and inside its branches, ensuring that the seeds not only spread by dispersing but also end up in the soil.  Once in the soil, the seeds last about five years.

“So even if you go and clear out the plant one year it will keep coming back for several years after,” Gibson said.

The plant crowds out native species and there is some evidence that chemicals secreted by its roots negatively affect the nutrient cycle and the ability for other seeds to germinate, possibly hurting forest regeneration following fire events.

And fire is another problem where the plant is concerned.

“It can climb trees,” Gibson said.  “The problem is that, although fire is generally a good thing in forest, when this plant dries out during the winter season it can provide a fire ladder leading up into the trees, where it can lead to crown fires.”

Gibson said the summarizing and disseminating the event will help land managers all over the country deal more effectively with Japanese Stiltgrass issues.

“A lot of the people who deal with this problem don’t do research; it’s not their job.  So they need to know what the research is saying,” Gibson said.  “As researchers, we ask basic questions about the biology and ecology of the plant, what it’s doing to the environment, how it’s dispersing.  Other research might be applied, such as testing herbicides and other control methods.

“The hope is land managers can actually take that information and apply it to their situation,” he said.  “So it’s an important communication between researchers and managers.”

Christopher Evans, coordinator of the River to River CWMA, works with agencies, organizations and individuals to manage invasive plants.  He said SIU Carbondale’s help is critical to getting the message out.

“The University provided a great venue and staff support for the Stiltgrass Summit. Also, the Department of Plant Biology and Center for Ecology both participated by sponsoring and helping plan the summit,” Evans said.  “SIU Carbondale’s assistance helped attract the large attendance and great speakers that made this summit a success.”

Evans said the white paper would be an important tool for land managers who battle the Japanese Stiltgrass problem throughout the area.

“Accurate, up-to-date information on the biology, impacts and control is needed if we want to make the best decisions on spending time and resources toward management of invasive species,” he said.