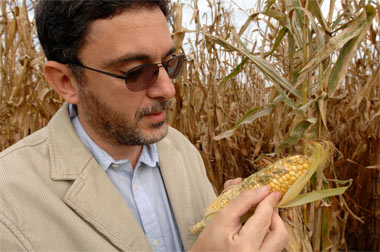 CARBONDALE, Ill. -- While the furor over pet food that poisoned dozens of dogs a few years back has died down, the fungal toxin that did the deed is still very much alive.

Fakhoury has been focusing on aflatoxin -- the culprit in both the human and pet poisonings. Produced by the fungus Aspergillus flavus, aflatoxin contaminates such food crops as corn, peanuts and pecans. In large doses, it can lead to a host of serious, even fatal, diseases.

“Aflatoxin is believed to be one of the most potent naturally occurring carcinogens,” Fakhoury said.

In addition to causing liver cancer, aflatoxin can interfere with the immune response and short-circuit growth in both people and animals.

In developing nations, which lack the resources to properly store and monitor their food, millions of people risk chronic exposure to the toxin, making it a significant food safety problem. In this country, however, government regulations keep levels low in food and feed, though those same regulations do have an economic effect on farmers.

“You can have a problem in a small area of a field-- just a few plants -- but you’ll see a big impact,” Fakhoury said.

“Even a few ears of corn can contain enough toxin so that when you harvest the plant and everything is mixed together, the whole product will be laced with it and may need to be discarded.”

Fakhoury’s research homes in on the fungus’ inner workings, particularly as they relate to corn. He works closely with the U.S. Department of Agriculture’s New Orleans-based Southern Regional Research Center, which has a national food safety program focusing largely on aflatoxin research.

“We try to understand how the toxin is produced, what genes are involved and what triggers the production,” he said.

“We are looking at both tolerant and susceptible lines of corn trying to identify which proteins are (active). We then analyze these proteins to see what is known about them. We compare them to see how they differ and, in the tolerant lines, to look for some common ground that might explain why the plant is tolerant. We also test them to see if they’re doing something to the fungus.”

Once the researchers pinpoint which proteins seem to play a role in tolerance, they can include them when developing new corn lines.

Ochratoxin, a second focus for Fakhoury, doesn’t get the bad press of its “cousin” aflatoxin, but it, too, has carcinogenic qualities. Found in foods such as grains and coffee beans, ochratoxin also contaminates grapes, a particular concern in Southern Illinois with its burgeoning vineyards.

“Although ochratoxin levels are not, as far as I know, heavily regulated in the United States, they are regulated in Europe,” Fakhoury said. “As our wine industry develops, we will probably begin exporting (so this could become more of an issue).

While researchers still have a lot to learn about the genes involved in ochratoxin production, an inherent peculiarity in the toxin itself may help them do so.

“The interesting thing about this toxin is that it is produced by several species (of a particular fungus) belonging to different genera (groups that contain similar species) so you can study many different organisms instead of just one,” Fakhoury said.

“You can see how the ability to produce the toxin evolved (which should make it easier to counteract).”

In addition to tracking down that toxin’s genetic origins, Fakhoury is visiting a small number of vineyards in Southern Illinois and Missouri, looking for evidence of toxin-producing fungi. What he finds may indicate a need to look at vineyard culture and management practices.

He also is testing fungi he finds for toxin production. Not only will these screens give him a “map” of possible trouble sites, they may also reveal the presence of certain “isolates,” or fungal strains that do not produce the toxin.

“These could be used as bio-control agents by out-competing the toxin-producing strains if they become a problem,” Fakhoury said.