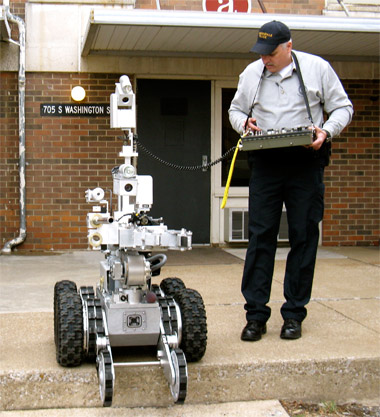 CARBONDALE, Ill. -- The members of the Southern Illinois University Carbondale-Carbondale Police Department Bomb Squad have a new pal -- one hardwired to do the most dangerous work.

“The idea is to do as much as we can remotely,” Sgt. Mark Goddard of the Carbondale Police Department said. “This robot can look over a wall, around corners, underneath vehicles. It can go up and down stairs. It can even tow a vehicle to a safe place for closer examination if necessary.”

The less time the officers have to spend in close proximity to a bomb, the safer -- obviously. The robot allows them to do some of the initial examination of a suspicious package from a distance. The robot works with another new piece of equipment -- a state-of-the-art X-ray machine -- to further reduce the amount of time officers need to be up close to potential explosives and other dangerous devices.

“The X-ray machine uses digital imaging, which is cost-saving for us,” noted Sgt. Bennie Vick of SIUC’s Department of Public Safety. “We can forward the images of the interior of a suspicious package to a database maintained by the FBI Bomb Data Center in Quantico, Va. That can help us identify what type of device we have and what we should do with it.”

The bomb unit is two officers from the SIUC Department of Public Safety and two from the Carbondale Police Department. The unit is one of 11 FBI-certified bomb squads in the state and the only local law enforcement-based squad in Illinois south of Champaign. The unit generally handles six to eight calls a year. Not every call is a potential bomb -- some are suspicious packages.

It goes without saying that “suspicious” includes more today than it did before the terrorist attacks on Sept. 11, 2001.

Most of the calls to which the bomb squad responds turn out to be false alarms. However, there have been potentially dangerous situations and tense hours. For example, in October 2004, the bomb squad searched for -- and eventually found and detonated -- crystallized ether that had been part of a Cold War-era federal government surplus medical supply cache stored in the Murphysboro Middle School. More recently, the bomb squad handled pipe bombs in the Carbondale area, mobile meth labs in the Harrisburg area and other potential emergencies in Golconda and Grand Tower.

The robot can also be used in crisis negotiation or hostage situations.