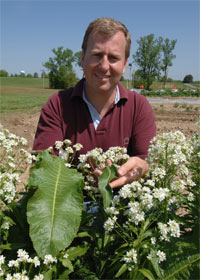 Two of a kind -- The flowers of these horseradish plants look the same, but the leaves tell a different story. S. Alan Walters, who heads the horseradish breeding program at Southern Illinois University Carbondale, hopes that cross-pollination of the flowers will produce seeds for hybrid plants that will yield high-quality roots and a lot of them (a trait in the plant with the big leaves), while resisting diseases that cause root discoloration (a trait in the plant with the small leaves).

CARBONDALE, Ill. -- Racehorses have names you don't forget: Seabiscuit, for instance, or Man O'War. Horseradish, on the other hand, gets stuck with a number.

"315 has good biomass, a lot of yield potential, produces really white roots, plus it's really hot in flavor -- it has a lot of pungency," said Walters of a two-year-old cultivar he developed, just now being planted in growers' fields.

"We're going to see how well it does, whether the growers like it. You never know until a couple of years down the road how the growers will feel about it and how well the processors will like what they get."

The development of new cultivars is a high-stakes race for the crop's top producers, clustered in the Metro East/Collinsville area.

"A lot of the horseradish cultivars they have now are starting to lose yield and quality characteristics," Walters said.

"The outer surface of the root is becoming barky instead of smooth, and they are losing their overall yield potential."

Several disease-causing organisms that cause root discoloration have growers especially edgy. When these pests are at work, the roots sometimes develop little black spots, but they also can turn entirely black. Because processors want a clean-looking, white root, keeping ahead of this disease is crucial.

"We're trying to breed for resistance, but that will take several years, so right now we're just trying for a little tolerance," Walters said.

Walters, who took over the program from longtime breeder C. Chris Doll late in 2005, works closely with the growers in producing new cultivars. He may start a four-year breeding cycle with as many as 3,500 different lab-grown seedlings, which he farms out as transplants to the growers' fields.

At harvest, he'll rate the roots, with only about 10 percent making the first cut. Because producers grow horseradish from roots, not seeds, the growers will then plant bits of the top-rated roots in their fields during the next growing season, with Walters again assessing the results. By the end of the fourth year, he will have winnowed his 3,500 possibilities down to about four. Then he meets with the growers.

"They go through, taste them, do an internal rating, then we have a discussion and they decide among themselves which ones they want," Walters said.

Their selections then go to a specialist at the University of Illinois, who removes the field pathogens and produces clones from the clean tissue. From there, a grower takes over, planting the cloned cultivars to increase their numbers for commercial production.

"It's a long process," Walters said.

"Every year, we have material coming down the pipeline, and that's what we want: to have a few new cultivars to release every year," Walters said.

"Some will do just OK, others won't prove to be useful, but there will be some with the potential to become the mainstay of the industry in the future."